Passing of Accounts and Court Costs 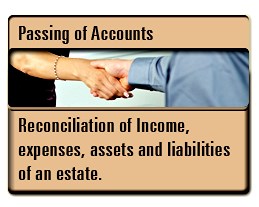 Re Rodgers Estate 2017 BCSC 2001 discussed who should bear the costs of a passing of accounts hearing where it was asserted that no valid complaints were raised re the accounting by the party challenging them.

The court ultimately held that the estate should bear the costs but cited authority for who should pay for the costs if the administrator was forced to take the proceedings by a beneficiary who did not have valid reasons for forcing the issue to a hearing.

I have considered the two authorities relied upon by Mr. McLellan and a decision not referred to but in my view helpful to the analysis, being Re Chevrefils Estate, 2010 BCSC 753. In that decision, District Registrar Sainty, in respect of costs of the passing of accounts said:

[29] As I have noted, the general rule is that the estate must bear the costs of settling disputes as a cost of administration. The question to be asked is: whether the administrator was forced to the expense of passing the accounts by the conduct of a beneficiary? In my opinion, but for Catherine Croft’s refusal to approve the accounts this application would not have been necessary.

[30] That does not mean, however, that she ought not to be accorded the satisfaction and peace of mind which having this formal passing may bring if it is felt that such a passing was reasonable. An administrator has a duty to account to the beneficiaries. There is no requirement that a beneficiary consent to the accounts prepared by an administrator. He or she is entitled to attend at a hearing and to question the administrator and the accounts.

[31] However, in the circumstances of this case, I am of the view that there was no rational reason for Catherine Croft’s refusal to agree to the Accounts. She did not provide any particulars for her refusal – only the statement . . . regarding the residue of the estate which either makes no sense or is contrary to law. Further, in respect of her complaint in relation to the Administrator’s remuneration, she has failed to provide any particulars of her complaints or point to any specific failures on the administrator’s behalf . . .

18      While it has been ultimately conceded by Diane Rodgers that the accounts should be passed as presented, I am of the view that it was not unreasonable in all of the circumstances for her to proceed to the hearing. While her objections all fell by the wayside as a result of the hearing process, and perhaps she could have and should have reached that conclusion before the hearing, I cannot say, unlike in Re Chevrefils, that there was no rational reason for her not to agree to the accounts. There was a concern expressed about the amount of legal expense and a concern expressed about the relationship of the agent and the executor as it related to the expenses incurred by the estate.

19      Unlike in Re Chevrefils, there was some rational connection between the objections and the circumstances that prevailed, albeit those objections were eventually abandoned.

20      Accordingly, the costs of the passing incurred by the executor will be assessed as special costs, and will be paid out of the residue of the estate before the estate is distributed.