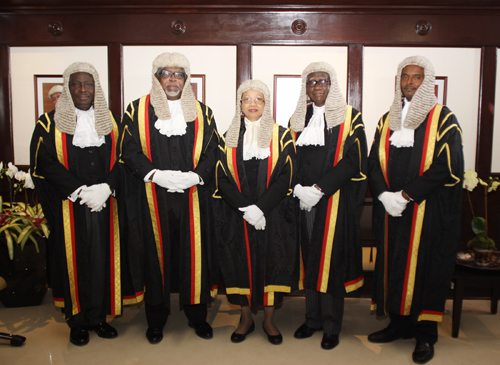 Ace Life Insurance Co. v Li 2015 BCSC 2533 held that a judgement against the defendant for $100,000 in Hong Kong as the personal representative of her late husband’s estate for court costs as the losing party in an action she brought on behalf of the estate, but stood to personally gain if she had won, could be enforced in British Columbia.

This area of law is known as Conflict of Laws and it can be very difficult to navigate- the facts of this case as such are limited to between Hong Kong and British Columbia and not every judgement from around the world will be enforced.

The Court held that the foreign judgments for court costs could be enforced in British Columbia for a few reasons including that to do so would not offend the basic morality of Canadians and the costs had been assessed on a legislated code after a fair trial.

[10] There was no dispute on the legal test to be applied when an application is made to enforce a foreign judgment. In Morguard Investments Ltd. v. The Savoye, [1990] 3 S.C.R. 1077, the Supreme Court of Canada considered whether an Alberta judgment could be enforced in the B.C. courts. It held that it could, and the Supreme Court of Canada adopted the “real and substantial connection” test. That test asks whether there is a real and substantial connection between the defendant in the domestic action and the subject matter of the litigation in the foreign judgment sought to be enforced. In 2003, the Supreme Court of Canada had occasion to consider whether the test should be applied to international judgments, and it held that it did in Beals v. Saldanha, [2003] 3 S.C.R. 416.

[11] Ms. Li does not deny that Ace Life Insurance has established the real and substantial connection test in this case. She says an exception applies and the judgment should not be enforced on that basis.

[12] In Beals, the court discusses the defences available to a domestic defendant at paras. 39 to 77, which include fraud, public policy and lack of natural justice. Ms. Li relies on public policy defence in this case.

[13] At paras. 71 to 77, Justice Major, on behalf of the majority of the court, sets out the scope of this defence. To be successful, the domestic defendant must establish that the foreign law is contrary to Canadians’ view of basic morality or where the outcome is so egregious it would shock the conscience or be unacceptable to reasonable Canadians. One example suggested would be enforcement of a judgment rendered by a court proven to be corrupt or biased.

[14] As noted by Justice Major, the public policy defence amounts to the impeachment of a foreign judgment by condemning the foreign law on which the judgment is based. He stressed it is not a defence to be granted lightly and ought to have narrow application.

[15] In that case, the plaintiff in the Canadian litigation was attempting to enforce an award it received from a jury in Florida. The Florida litigation involved a dispute about the sale of vacant land owned by residents in Ontario. The Ontario defendant chose not to actively defend the action and default judgment was entered. A jury awarded $210,000 in damages and $50,000 in punitive damages. The award was not appealed.

[16] The successful party in the Florida action then sought to enforce its award in Ontario. In the meantime, interest accrued such that by the time the case was heard in the Supreme Court of Canada, the award had grown to over $800,000. The majority of the Supreme Court of Canada concluded that although the amount involved was large, that did not on its own create a basis to refuse to enforce the judgment, and at para. 76 Justice Major stated:

Even if it could be argued in another case that the arbitrariness of the award can properly fit into a public policy argument, the record here does not provide any basis allowing the Canadian court to re-evaluate the amount of the award. The public policy defence is not meant to bar enforcement of a judgment rendered by a foreign court with a real and substantial connection to the cause of action for the sole reason that the claim in that foreign jurisdiction would not yield comparable damages in Canada.

[17] Ace Life Insurance submits it has easily met the test to enforce the Hong Kong judgment. It then asks this court to order the costs to be paid by Ms. Li in her personal capacity as opposed to as a representative of her husband’s estate.

Should the Hong Kong judgment be enforced?

[18] In relation to the first issue, Ms. Li argues that the award offends against the principles of proportionality and therefore would offend Canadians’ sense of basic morality. In my view this argument cannot succeed. It is akin to the argument that was raised and rejected in Beals that it was the amount of the award that would offend Canadians.