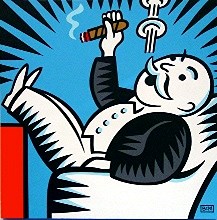 Bank of Montreal v. Koszil, BCCA, [1985] B.C.W.L.D. 1358, [1985] B.C.W.L.D. 1524 involves a promissory note and collateral mortgage that had been cosigned by one of the joint tenants of a property, but the court found the mortgage to be an unconscionable mortgage, for the co signor to have signed, and that they had split the unity of title and therefore severed the joint tenancy and established tenancies in common between them.

The facts essentially were that the bank’s appeal was dismissed and the banks promissory note and property mortgage was unconscionable and the co- joint tenant and guarantor was not liable.

15        Mr. Justice Meredith held that the mortgage obtained by the Bank from Banyacski was unconscionable and, therefore, unenforceable. His reasons for judgment read in part as follows:

Mr. Koszil’s assets, as the bank knew, were quite insufficient to discharge his obligation, It was then that the bank called upon Mrs. Banyacski to put up her interest in her home as collateral. She did so out of faith in her husband, and in particular in his explanation that there must have been a mistake as he had not received the money alleged to be owing. The bank was aware that there was no mistake. Thus the situation “cried aloud” for Mrs. Banyacski to have “careful and independent advice.” There was no “real chance” of Mr. Koszil’s affairs becoming viable if the documents were signed. There was no sense in Mrs. Banyacski risking her house “without benefiting anyone but the bank”, it would have been better for both her and Mr. Koszil to have at least the house “when the crash came”. Mrs. Banyacski was given no opportunity to make a worthwhile appraisal of Mr. Koszil’s affairs upon which an informed judgment could be reached. In these circumstances as in Lloyds Bank the mortgage was unsconscionable

The splitting of the unity of title established tenancies in common, and the bank continued to have a clatter role mortgage only upon the primary borrowers one half interest in the property, and not the guarantors.

The promissory note and collateral mortgage were not enforceable against B. However, the mortgage specifically provided that the obligations of the mortgagors were joint as well as several, and the release of B. did not release K.

Splitting the unity of title established tenancies in common and the bank continued to have a collateral mortgage over K.’s undivided one-half interest in the property.