Rebutting a Presumption of Undue Influence 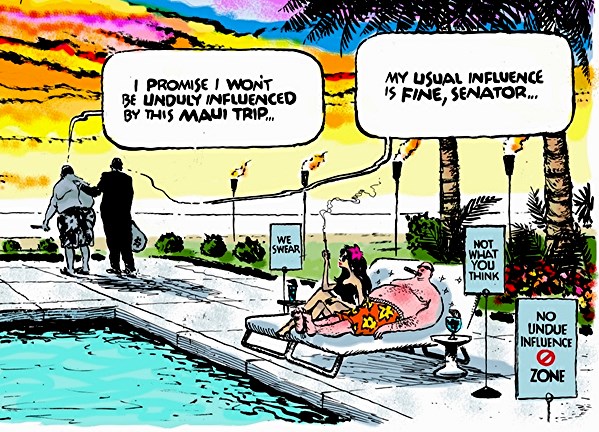 Cowper- Smith v Cowper Smith estate 2015 BCSC 1170 discusses the evidence and legal criteria required to set aside a transfer of land and a declaration of trust on the basis of undue influence, where such presumption may arise such as with a caregiver.

The plaintiffs say that there are two classes of transactions that may be set aside on grounds of undue influence. The first is where the court is satisfied that the gift was the result of undue influence. The second is where the relations between the donor and donee have at the time of or shortly before the execution of the gift been such as to raise a presumption that the donee had influence over the donor.

[72]         The plaintiffs say that there are number of facts relevant to the question of whether the potential for domination existed in the relationship between Gloria and Elizabeth:

(a)      While Arthur was alive, Elizabeth relied on him to manage their financial affairs;

(b)      After Arthur’s death, Gloria began assisting her mother with the same sort of things, looking after investments, doing her tax returns;

(c)      After Arthur’s death, Elizabeth relied on Gloria for advice and information;

(d)      In the spring of 2001, Elizabeth was spending a significant amount of time with Gloria;

(e)      Elizabeth told Ms. Iverson that Gloria was always there to help her;

(f)       Ms. Chelle observed that Elizabeth admired her daughter and relied on her daughter’s judgment and opinion;

(g)      Elizabeth brought letters she had written to Max and Nathan to Gloria to see how she felt about them;

(h)      Nathan testified that when Elizabeth returned from visiting Gloria she was upset about things between herself and Nathan;

(i)       Gloria says that in the spring of 2001 she was concerned about her mother and her mother’s best interests. At this time, Gloria became:

(ii)      Later, a joint owner of her mother’s home, with the home being gifted to her on her mother’s death; and

[73]         The plaintiffs submit that these factors show a relationship between Gloria and Elizabeth that gives rise to a presumption of undue influence. They say that once the circumstances trigger the presumption, the donee must show that the donor entered into the transaction as a result of her own full, free, and informed thought. Legal advice alone may not be adequate to successfully rebut the presumption. It is not enough for an independent solicitor to carry out the proposal which had been previously settled. There must be some objective advice on the merits and prudence of the transaction. The plaintiffs say that Mr. Easdon’s advice did not meet this requirement. They say that the presumption has not been rebutted.

[75]         The defendant argues that she had no understanding what the Declaration of Trust meant and that her statements from June 2001 to August 2010 to the effect that she understood that all assets would be shared equally, suggests that she did not exercise undue influence on her mother.  She says that her evidence that she had no understanding of the meaning or memory of the execution of the Declaration of Trust is corroborated by her behaviour.

[76]         She says that I should accept her evidence that she was put on inquiry as to why Mr. Easdon rendered an invoice to her mother and that in turn led to Mr. Scambler learning of the Declaration of Trust. It was at this point that she decided to maintain a claim to the Cadboro Bay Property and the Investments that belonged to her by right of survivorship. She says that with this in mind, she clearly did not actually influence Elizabeth to create the current situation.

[77]         The defendant argues that Elizabeth had independent legal advice or the opportunity to obtain independent legal advice. She acknowledges that Mr. Easdon’s evidence falls short of what one would have hoped for in terms of knowing exactly what was said to Elizabeth. She accepts that he may not have questioned her about the merits of the transaction and it may have been preferable had he done so. She argues, however, that the evidence of Ms. Iverson reveals that the merits were understood by Elizabeth. Moreover, she says that even imperfect independent legal advice may be sufficient to rebut the presumption in conjunction with other evidence that the transaction was in accord with the transferor’s wishes.

[78]         She argues that it is clear from the evidence of Ms. Iverson that Elizabeth knew and appreciated what she was doing.

[79]         She argues that, while her mother may have been influenced by her in various aspects of her life, there is nothing improper in that. The transaction should be set aside only if the influence was undue. The court has to be satisfied that the transaction was entered into contrary to the true will and intent of the person acting under the influence of another.

[80]         She acknowledges that Elizabeth was undoubtedly influenced to some degree by David. She was also influenced by Ms. Iverson and the relationship between herself and her daughter as well as her relationship with her sons.

What then must a plaintiff establish in order to trigger a presumption of undue influence? In my view, the inquiry should begin with an examination of the relationship between the parties.  The first question to be addressed in all cases is whether the potential for domination inheres in the nature of the relationship itself. …

Having established the requisite type of relationship to support the presumption, the next phase of the inquiry involves an examination of the nature of the transaction…

…[I]n situations where consideration is not an issue, e.g. gifts and bequests, it seems to me quite inappropriate to put a plaintiff to the proof of undue disadvantage or benefit in the result.  In these situations the concern of the court is that such acts of beneficence not be tainted.  It is enough, therefore, to establish the presence of a dominant relationship.

Once the plaintiff has established that the circumstances are such as to trigger the application of the presumption, i.e., that apart from the details of the particular impugned transaction, the nature of the relationship between the plaintiff and defendant was such that the potential for influence existed, the onus moves to the defendant to rebut it. … [T]he plaintiff must be shown to have entered into the transaction as a result of his own “full free and informed thought”[.]

Since the trust instrument is unquestionably more akin to a gift or bequest than a commercial transaction, the existence of the required relationship without more is sufficient to trigger the presumption.  It remains, therefore, to be determined whether the presumption has been rebutted.  In making that determination, it is necessary to conduct a “meticulous examination of the facts”[.]

[84]         In Stewart at para. 97, Mr. Justice Punnett summarized factors that may be considered to rebut the presumption of undue influence:

[97] To rebut the presumption of undue influence, the defendant must show that the donor gave the gift as a result of her own “full, free and informed thought”: Geffen at 379. A defendant could establish this by showing:

The trial judge also correctly set forth the law respecting the manner in which a presumption may be rebutted. …[F]actors to be taken into account in considering whether or not evidence of legal advice given to the granting party is sufficient to rebut the presumption. At paragraph 24 of Fowler Estate [v. Barnes (1996), 142 Nfld. & P.E.I.R. 223 (Nfld. T.D.)], Green, J. identified factors which may affect the character of legal advice to be as follows:

[Emphasis in the original, citations omitted.]

[86]         Was the relationship between Gloria and Elizabeth one in which there was the potential for domination? I am satisfied it was.

[87]         Both Max and Nathan testified about Elizabeth’s reliance on Gloria’s judgment. Nathan testified as to his mother’s response to visits with Gloria, how she would become agitated and say that he was trying to take her house.  Adrienne testified that, even before Arthur died, Gloria was a dominant personality, people did what Gloria wanted. After Arthur died, Elizabeth relied even more on Gloria’s judgment. By Gloria’s evidence, she had to teach Elizabeth how to write a cheque. Elizabeth would even seek her advice about letters that she proposed to write to her sons (and Gloria would keep copies of the letters). Elizabeth’s neighbour, Ms. Chelle, testified that Elizabeth admired Gloria. Elizabeth told her that Gloria ran the doctor’s office and made financial decisions. When Gloria was present, Elizabeth would nod along with Gloria’s views. Elizabeth would not contradict Gloria. After Arthur died, Elizabeth relied more on Gloria and Gloria was around more often. In the meeting of March 31, 2001, Elizabeth told Ms. Iverson that Gloria was always there to help her; that she spent a lot of time at Gloria’s; that Gloria paid her bills. On May 30, 2001, she told Ms. Iverson that Gloria looked after her investments.

[88]         Letters to Max or Nathan from Elizabeth in this timeframe are written jointly in some cases with Gloria or are in Gloria’s hand, signed by both. In other cases, Gloria writes on behalf of her mother, her uncle David, and herself.

[89]         All of the witnesses describe Elizabeth as a quiet, home-loving, family-oriented person who did not like conflict.

[90]         After Arthur’s death, Gloria was the family member that Elizabeth spent most time with. She socialized with her frequently and trusted her to handle her banking and investments. Gloria prepared her tax returns. Elizabeth was deferential to Gloria. She did not like conflict. She sought Gloria’s advice. I am satisfied that Gloria had the ability to dominate Elizabeth’s will, whether through manipulation, coercion, or outright but subtle abuse of power. In my view, the relationship was one in which there was a potential for domination.

[91]         Has the defendant rebutted the presumption of undue influence? Does the evidence satisfy me on the balance of probabilities that the Declaration of Trust and the transfer of the Cadboro Road Property into joint tenancy were the result of Elizabeth’s full, free, and informed thought?  I am not satisfied that they were.

[A]ll influences are not unlawful… pressure of whatever character, whether acting on the fears or the hopes, if so exerted as to overpower the volition without convincing the judgment, is a species of restraint … Importunity or threats, such as the [donor/beneficiary] has not the courage to resist, moral command asserted and yielded to for the sake of peace and quiet, or of escaping from distress of mind or social discomfort, these, if carried to a degree in which the free play of the [donor/beneficiary]’s judgment, discretion or wishes, is overborne, will constitute undue influence[.]