Incorporation of Documents Into a Will 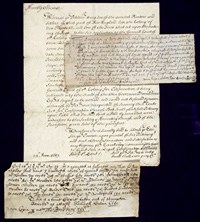 Because the facts in  Yaremkewich Estate 2015 BCSC 1124 resulted in the Justice allowing a 12 page detailed document relating to specific bequests to form part of a will likely signed prior to the date of said document, the court dealt with the law relating to the incorporation of documents into a will under WESA and testamentary intent.

The Incorporation of Documents into a Will

[42]         Ms. Yaremkewich’s Will refers to the bequest lists and the care instructions for the dog.  Where a will refers to a separate document, that document must meet certain requirements to be incorporated into the will.

[44]         It is impossible to discern from the evidence whether or not the requirements for incorporation were met, but even if they were met, there is no valid will into which the documents could be incorporated.

[45]         Section 58(3)(a) provides that where the court is satisfied that a document represents the testamentary intentions of the deceased, the court may order that the document “be fully effective as though it had been made as the will or part of the will of the deceased person” [emphasis added].  This wording indicates that where a person has not complied with formal requirements to incorporate a document into a will, s. 58 can still be used to cure the defect if the document represents the testamentary intentions of the deceased.

[46]         Therefore, for purposes of this s. 58 analysis, the proper inquiry is not whether the documents are validly incorporated but whether each of the documents represents the testamentary intentions of the deceased.

[47]         This was the approach taken by the Saskatchewan Court of Appeal in Bunn Estate.  In that case, the testatrix created three testamentary documents.  One was a printed will-template form that was signed and dated.  This document named an executor and revoked all prior wills but did not contain directions disposing of her estate.  The second document was an unsigned, handwritten sheet of paper that had the same date as the will form but was not signed.  This document contained instructions for her funeral and made several bequests.  The third document was another will form that was identical to the first document except it was unsigned.  All of these documents were placed in a sealed envelope that was labelled as the testatrix’s will.

[48]         Without reference to the doctrine of incorporation, the Saskatchewan Court of Appeal applied the curative provision in s. 35.1 of that province’s Wills Act, R.S.S. 1978, c. W-14 (since repealed), and held that the first and second documents should be admitted to probate even though they did not comply with the execution formalities imposed by the statute.  The trial judge found that these documents set out the deceased’s testamentary intentions, even though these intentions were recorded in two documents instead of one (at 234).  The Court of Appeal agreed and found that “[i]f the two documents are read together, a complete will is the result” (at 239).  Accordingly, the Court of Appeal upheld the trial court’s decision that the two documents should be admitted into probate as a valid will.

[49]         The types of evidence that are relevant to prove testamentary intent will vary from case to case.  In this case, the contents, the detailed wording of the Will and its attachments, and the circumstances in which they were found militate in favour of finding that the will and two of the accompanying documents, the bequest lists, represent Ms. Yaremkewich’s testamentary intentions meaning that they represent her fixed and final expression of intention as to the disposal of her property on death.

[50]         Other evidence is also of assistance.  For example, her statements to the witnesses Mr. and Mrs. Bespalko indicate that she was contemplating specific bequests at the time that she arranged for witnesses to the Will.  Ms. Yaremkewich was ill at this time, and I infer from her actions that she wanted to put her affairs in order.  She used a will template rather than an ordinary piece of paper.  The four documents were treated as important by being placed in an envelope and marked as her will.

[51]         It is relevant that Ms. Yaremkewich attempted to comply with the formalities of making a will, including signing and dating the Will at the end and initialling many of the pages.  Attempts were made to comply with the formalities of execution by having two witnesses sign.  Executors were appointed.  Finally, many of the provisions are detailed and indicate a great deal of thought, such as the appointment of a lawyer as an alternate executor, the making of alternative gifts if certain beneficiaries predeceased her, and bequests to minors not being made until they reach the age of 21.

[53]         Finally, there is no evidence to the contrary or suspicious circumstances that indicate the Will does not represent Ms. Yaremkewich’s testamentary intent.

[54]         In the circumstances, I find that the Will represents Ms. Yaremkewich’s testamentary intentions.

[55]         Concerning the other documents in the envelope, the circumstances surrounding the creation of the Will are a key factor in determining Ms. Yaremkewich’s intentions.  Although it is not possible to determine exactly when all of the documents were completed, it is likely that they were created at approximately the same time and I so find.  The will form that Ms. Yaremkewich filled in was only three pages long, and she filled in nearly all the blank space provided for gifts under heading number four of the template.  To be able to include detailed gifts and instructions, it was necessary for her to include additional pages.  Accordingly, in provisions three and six of the Will Ms. Yaremkewich referred to attachments and then placed the documents together in an envelope which was marked “Will of Denise Lynn Bevan Yaremkewich”.  Given the amount of detail and consistency in the additional 18 pages, I am satisfied that the additional three documents were created at approximately the same time as the main body of the Will, and that she intended for these to operate alongside the Will.

[56]         Based on the foregoing, including the factors I have referred to that support the finding that the Will represents Ms. Yaremkewich’s testamentary intention, as required by s. 58(2)(a) of WESA and as explained in George, I find that I find that the two bequest lists enclosed in the envelope also represent the testamentary intentions of the deceased and are therefore part of the Will.  Each of the documents in substance contemplates gifts on her death and in that sense is testamentary in nature.

[57]         The personal bequest list is 12 pages long and entirely in Ms. Yaremkewich’s handwriting.  It sets out a large amount of her personal property using detailed descriptions, and grants highly personalized gifts to 19 beneficiaries, including friends, family, and extended relationships.  Many of the gifts are small personal items.  It is obvious that Ms. Yaremkewich spent a great deal of time considering which gifts to give to each beneficiary.  I have no doubt that this represents her carefully-considered testamentary intentions.

[58]         For similar reasons, I find that the charitable bequest list also represents Ms. Yaremkewich’s testamentary intent.  This document distributes the remainder of the estate to 12 named charities with various charitable goals, but the charities seem to predominantly deal with animal welfare and medical services.  Since Ms. Yaremkewich’s testamentary documents are detailed and there is no other provision outlining the remainder of the estate, and in the absence of any evidence to the contrary, I find that this represents her intention to dispose of the remainder of her estate after the other gifts are made.

[59]         The only exception is the document by which Ms. Yaremkewich left instructions for the care of her beloved dog Jake.  It does not contain funeral instructions for her or a disposition of her property on death.  The bequest for Jake’s care is made in the Will which I have found to be valid.  Although the care instructions indicate Ms. Yaremkewich’s wishes for Jake’s care after her death, which is an admirable concern, they are not testamentary intentions.  As such, that document does not have testamentary status and is not within the curative power of s. 58.

[60]         After considering all of the evidence, I am satisfied that the Will and the two accompanying bequest lists collectively represent Ms. Yaremkewich’s testamentary intentions.  They represent her fixed and final expression of intention as to the disposal of her property on death.

[61]         I am therefore satisfied that the Will and the two bequest lists which were placed in the envelope should be treated collectively as a fully effective will pursuant to s. 58.