Lawyers Accounts Can Be Reviewed 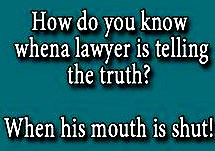 Clients of lawyers have the right to have the reasonableness of a lawyers accounts reviewed and assessed under the provisions of the Legal Professions act.

Hutchinson v Barnes 2015 BCSC 556 is a typical example arising out of an estate. A senior lawyer acted for a client in a convoluted and protracted estate matter in which the clients best potential recovery was $41,000.

Regrettably the lawyer’s account totalled $94,000 based on his hourly rate that had been agreed to by the client.

The court allowed the lawyer fees of $32,710 stating simply that the fee was unreasonable when weighed against the result obtained.

The court made the following statements of law regarding the Legal Professions Act and the criteria taken into account in assessing a lawyer’s bill:

(4) At a review of a lawyer’s bill, the registrar must consider all of the circumstances, including

(a) the complexity, difficulty or novelty of the issues involved,

(b) the skill, specialized knowledge and responsibility required of the lawyer,

(c) the lawyer’s character and standing in the profession,

(f) if there has been an agreement that sets a fee rate that is based on an amount per unit of time spent by the lawyer, whether the rate was reasonable,

(g) the importance of the matter to the client whose bill is being reviewed, and

[29]         The list of factors to be considered is non-exhaustive. Consideration of the enumerated factors leads to the conclusion that this was a matter involving novel issues requiring a reasonable level of skill and responsibility by a lawyer whose character was not in question. The amount involved was about $40,000, and there is no question about the time spent by Mr. Hutchison (approximately 210 hours) over three years. The fee rate of $390 per hour was reasonable considering the task at hand and Mr. Hutchison’s experience.

[30]         Importance is subjective. This matter was important to the client but it was definitely not life-changing or life-threatening. The result obtained was the desired result but, as is often the case, it was due in some part to factors other than the lawyer’s efforts. An element of good luck was involved as well as good management.

[31]         This is a case where all the circumstances include weighing the result obtained (approximately $40,000) against the fees requested (approximately $95,000). As set out earlier in these reasons, it is irrelevant that Steven Barnes participates in the result as he is not the client