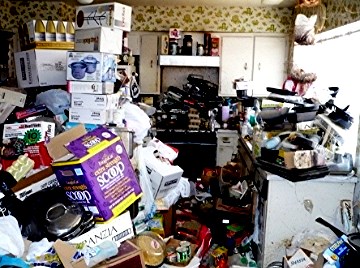 Research shows that 5% of the population has a hoarding disorder characterized by the excessive acquisition of and an inability or extreme unwillingness to discard quantities of junk  or useless objects.

Hoarding  goes well beyond any stretch of what might be considered “clutter”.

What is interesting is that I have noted over the years, that  a far greater number than the average of 5% hoarders somehow end up involved in estate litigation.

I have had cases ranging from, committeeships for their own protection and the protection of others, lost wills buried somewhere under tons of clutter, and children disinherited for cleaning out tons of mouldy newspapers, mice infested bedding, innumerable unopened purchased packages, broken things and just general contaminated trash, while the hoarder is in hospital.

The hoarder typically upon return to a newly clean but  empty and sanitary house suffers an extreme reaction in having his or her valuable possessions thrown out, and take steps to disinherit the perpetrators.

It was probably only after 30 years of practice that I eventually forced myself into an elderly clients apartment when she was unable to meet me at my office. She had absolutely refused to allow me to attend at her apartment, and when I did, the attached photo is reminiscent of what her kitchen looked like.

The premises were totally unsafe not only for herself, but for the other tenants in the building. There was no place for me to sit down.

One of the problems with hoarding behaviour is that it is often extreme because hoarders simply do not recognize it as a problem. They typically hold onto virtually everything that passes through their hands during their lifetime, often starting in preteens, being visible by early 20s, and problematic by the 50s.

While many of us have a problem with throwing out an item that we “might again use one day”, probably most people actually enjoy a good spring cleaning every now and then to rid themselves of the amazing amount of junk that one accumulates.

Hoarders go well beyond anything imagined in the normal sense and often live in the most unsanitary of conditions, particularly if they are the type of animal hoarder that has 50 cats all urinating and defecating throughout the house.

It is particularly interesting that the typical animal hoarder is deeply attached to his or her animals and has no comprehension that their pets  are being harmed by failure to provide them with proper care.

One really wonders how the hoarder can in fact even function within their own household given that the jampacked kitchen is invariably of no use, as is often the bathroom and the beds.

As was my experience, the hoarders are embarrassed to allow people into their sanctums which of course makes it difficult to maintain friendships and family. Family arguments and even interventions are often the result of perceived necessity in rescuing the hoarder from a dangerous situation.

Most hoarders have a psychological profile that is either depressed, very anxious, has attention deficit hyperactivity disorder, obsessive-compulsive disorder, or even dementia.

It is a very difficult problem to treat and as I alluded to earlier, and treatment often arises as a result of an intervention which may ultimately end up in a disinheritance.

Simply put, the research findings suggests that individuals who hoard exhibit impaired sensitivity to their own and others’ emotions, and conversely, relate the world around them by forming attachments to possessions rather than to people, even loved ones.