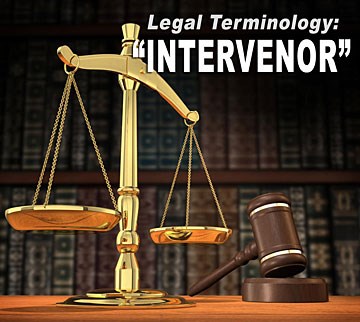 False Creek Residents v Vancouver  2014 BCSC 1674 contains an excellent quote on the law relating to allowing a non party to a court action, the right to “ intervene” Intervener Status into the action so that the non party might still present its evidence and arguments.

The court application came down to the Petitioner asking the Court to be added as a party, which Master Taylor ultimately granted, versus the other party opposing the application and saying that there was a concern that the Petitioner would “ hijack” the proceedings and thus should be granted only intervener status.

The Law On Ordering Intervener Status

1.      the nature of the group seeking the intervener status;

2.      the directness of the group’s interest in the matter;

A.   Nature of the applicant

B. Directness of the applicant’s interest in the matter

[15]      An intervenor applicant’s interest will be direct when “legal rights of the proposed intervenor will be affected or when any additional legal obligations would be imposed on the proposed intervenor resulting in a direct prejudicial effect”: R. v. N.T.C. Smokehouse, [1991] B.C.J. No. 2082 (C.A. Chambers); Faculty Association of the University of British Columbia v. University of British Columbia, 2008 BCCA 376 (Chambers) at para. 7. A direct interest does not materialize from a mere precedential concern: North Pender Island Local Trust Committee v. Conconi, 2010 BCCA 405 (Chambers) at paras. 6-7.

[16]      An intervenor application will not necessarily be defeated because the applicant has no direct interest in the outcome. In R. v. Watson, 2006 BCCA 234 (Chambers), Newbury J.A. stated at para. 3 (applied in Gehring at para. 7 and Kwicksutaineuk/Ah-Kwa-Mish First Nation v. British Columbia (Agriculture and Lands), 2011 BCCA 294 (Chambers) at para. 19):

[3]  … where the applicant does not have a “direct” interest in the litigation, the court must consider the nature of the issue before the court (particularly whether it is a ‘public’ law issue); whether the case has a dimension that legitimately engages the interests of the would-be intervenor; the representativeness of the applicant of a particular point of view or “perspective” that may be of assistance to the court; and whether that viewpoint will assist the court in the resolution of the issues or whether… the proposed intervenor is likely to “take the litigation away from those directly affected by it”. …

C. Suitability of the issue in the case at bar

[6]  Intervener status may also be granted if there is no direct interest in the issues between the parties but the applicant has an interest in the “public law issues”. The Court will then consider the issues in that particular case and will consider whether the intervener will bring a new or different perspective to the consideration of the issues, or will make a useful contribution towards resolving the issues, always bearing in mind that the intervention will not be permitted if it would result in injustice to the parties.

[19] The potential concern at this stage is whether the proposed intervener would change the issues or expand the scope of the litigation, thereby commandeering the proceedings and placing an undue burden on the parties to respond to arguments and issues immaterial to their private action: Ward v. Clark, 2001 BCCA 264 at paras. 6-11; applied in FortisBC Inc. v. Shaw Cablesystems Limited, 2010 BCCA 606 (Chambers) at para. 17. In Canadian Broadcasting Corporation v. Luo, 2008 BCCA 335 (Chambers) at para. 18, for example, Rowles J.A. noted in dismissing the application for intervenor status that the applicant wished to present arguments on the constitutional division of powers, whereas the appeal likely came down to an issue of statutory interpretation.

[11]      An order granting leave to intervene in an appeal is discretionary, and may be made on any terms and conditions the judge considers appropriate. The jurisprudence governing such applications was recently summarized and affirmed by Madam Justice Bennett in Friedmann v. MacGarvie, 2012 BCCA 109, 318 B.C.A.C. 119 (Chambers), as follows.

[12]      Generally, intervention will be permitted in two situations. The first is the case in which the applicant has a direct interest in the litigation, in the sense that the result of the appeal will directly affect its legal rights or impose on it some additional legal obligation with a direct prejudicial effect. The fact that the outcome might ultimately adversely impact individual members of a proposed intervenor is not, however, sufficient to constitute the necessary direct interest, since the Court would not, on the appeal, be directly considering their rights or liabilities: Ahousaht Indian Band v. Canada (Attorney General), 2012 BCCA 330 at paras. 4-8, 325 B.C.A.C. 312 (Groberman J.A. in Chambers), aff’d on review, 2012 BCCA 404.

[13]      Where an applicant does not have a direct interest, the Court may nevertheless grant intervenor status if the appeal raises public law issues that legitimately engage the applicant’s interests, and the applicant brings a different and useful perspective to those issues that will be of assistance in resolving them. The appropriate considerations were summarized by Madam Justice Newbury in R. v. Watson and Spratt, 2006 BCCA 234 at para. 3, 70 W.C.B. (2d) 995 (Chambers):

… where the applicant does not have a “direct” interest in the litigation, the court must consider the nature of the issue before the court (particularly whether it is a ‘public’ law issue); whether the case has a dimension that legitimately engages the interests of the would-be intervenor; the representativeness of the applicant of a particular point of view or “perspective” that may be of assistance to the court; and whether that viewpoint will assist the court in the resolution of the issues or whether, as noted in Ward v. Clark, the proposed intervenor is likely to “take the litigation away from those directly affected by it”. (Para. 6.) …

[14]      Factors weighing against granting intervenor status include the possibility that an intervenor will expand the scope of the proceeding by raising new or immaterial issues, or create an undue burden or injustice for the parties to the appeal by, for example, forcing them to respond to repetitive arguments: Friedmann at para. 19; Faculty Association of the University of British Columbia v. University of British Columbia, 2008 BCCA 376 at para. 15, 263 B.C.A.C. 3 (Chambers). Rule 36(5)(b) affirms this as it provides an intervenor may only make submissions that pertain to the facts and issues set out in the factums of the parties unless a court orders otherwise.

[15]      Finally, an intervenor is to make principled submissions on points pertinent to the appeal. It is not to argue for a particular result or support the position of one party or the other: Friedmann at para. 28.