“Reading of the Will” Only takes Place in Movies and Cartoons 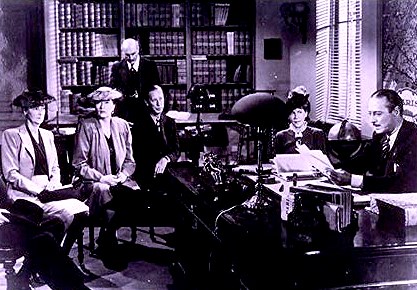 We have all seen movies, television shows, and cartoons that depict anxiety ridden prospective beneficiaries typically gathered in a dark paneled lawyer’s office for the so-called “reading of the will”, usually by the lawyer.

In 38 years of practice, disinherited.com has  done this once, and only by inadvertence when a throng of people descended upon the office and demanded to have the will read.

One of the persons was in fact the executor and he did in fact authorize the will to be  read  in the presence of the possible beneficiaries.

There were no fistfights, death threats, or any other memorable behavior that I recall. It was matter of fact.

The scenario makes for good theatre,but in reality it simply does not occur.

Typically what does occur is that the executor very quietly locates the original will.

In British Columbia a will searches is  required before probate can be granted, and that may or may not determine the location of the last will and testament, as the registration process is voluntary and not always complied with.

In British Columbia the executor must provide a copy of the will to all parties named in the will, as well as any person or persons who might be entitled to share in the estate on an intestacy.

This only occurs if the executor moves to probate the will through the Supreme Court registry, and that typically only occurs if there are assets over $25,000 solely in the name of the deceased, that require a grant of probate in order to be transferred into the names of the named beneficiaries.

There does seem to be a large sense of entitlement on the public as a whole to feel entitled to know what is in a person’s will, or to receive a copy of the will almost before rigor mortis sets in on the deceased.

It could be that the movies and cartoons that depict  the readings of the will contribute to this sense of entitlement,  and such people are often disappointed to learn that they are not is entitled uner the law, as they think.