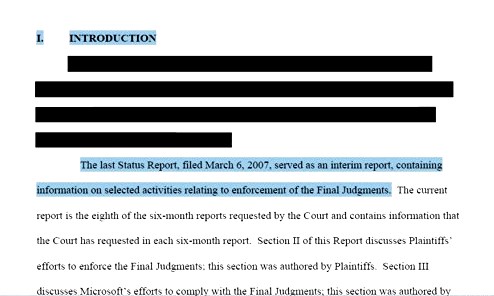 Redaction of compellable documents in litigation is an increasingly frequent and annoying  occurrence in the production of litigation documents.

the Federal Government  is perhaps the worst offender under the guise of Privacy legislation, but private parties are also increasingly attempting to with hold various portions of compellable documents under various excuses, few of which have merit in a court of law.

The leading case on redaction of documents is North American Trust Co v Mercer International Inc ( 1999) BCJ 2107 , where a defendant applied to court to compel the plaintiff to produce and entire agreement rather than just portions thereof that the plaintiff stated were the relevant portions.

[13] Under the rules of this court, a litigant cannot avoid producing a document in its entirety simply because some parts of it may not be relevant. The whole of a document is producible if a part of it relates to a matter in question. But where what is clearly not relevant is by its nature such that there is good reason why it should not be disclosed, a litigant may be excused from having to make a disclosure that will in no way serve to resolve the issues. In controlling its process, the court will not permit one party to take unfair advantage or to create undue embarrassment by requiring another to disclose part of a document that could cause considerable harm but serve no legitimate purpose in resolving the issues.

Examples of situations where the court had found there was good reason to allow a party to redact a document included, at paragraph 11:

11    In the cases to which I have been referred, litigants have been relieved from disclosing the whole of a document related to a matter in question where, but only where, the part withheld has been clearly not relevant to the issues and, because of its nature, there has been good reason why that part should not be disclosed. With reference to the decisions of this court specifically, good reason is apparent in the private nature of the affairs of a company recorded in the minutes of its directors’ meetings, or the personal sensitivity of a person’s medical records, diary notations, or familial communications …

Mr. Justice Lowry identified the process a party who wishes to produce a redacted version of a document must follow (Reasons paras 16-17). The steps include:

a.        Where a party has good reason to withhold disclosure of parts of a discoverable
document that are not relevant, the proper procedure is to make an appropriate note
to that effect when the document is listed under [Rule 7-1(1)];

c.         If the withheld disclosure is challenged, then the party seeking to redact a portion of
the document should seek exercise of the court’s discretion for which [Rule 7-1 (14) (a)]
provides that the Court may order that a party be excused from compliance with sub-
rule (1) either generally or in respect of one or more documents or classes of
documents;

d.        The exercise of the court’s discretion may require that he document be inspected its
entirety by the court as provided by [Rule 7-1(20)]; and

e.         If a litigant has listed a document without qualification, it should generally be required
to disclose the document in its entirety, following John LabattLtd. v. Molsons
Breweries, A Partnership, 1993 CanLII 3022 (F.C.) at p. 480.

In Hyvarinen v Burdett 2012 BCSC 1034 at paras 19-20 it was held that the above general rule did not apply to medical records due to there nature and privacy intersts of the plaintiff.