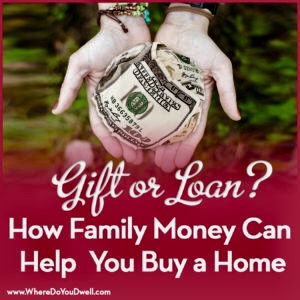 Weinhaupt  reviews  the law and came to the conclusion in that case that the funds were a loan and not a gift.

In T.J.M. v. C.R.M., 2009 BCSC 1122, at para. 81, for example, Joyce J. found that an advance from a spouse’s mother that was used as a down-payment to purchase a family home was in fact a loan, despite the provision of a similar gift letter in that case. Joyce J. relied on the presence of a written promissory note (as apparently exists in this case) as well as the fact that several payments had been made in repayment of the alleged loan (a fact not present in this case) to reach that conclusion.

[38] In order for the parties to qualify for mortgage financing for the purchase of the matrimonial home, Mr. and Mrs. Chui signed a letter, drafted by the respondent, indicating that the $60,000 they provided towards the purchase price was not a loan but rather a gift by them to the parties (“Gift Letter”). Mr. Chui testified that, without the Gift Letter, the parties would have had to purchase mortgage insurance, which was expensive. He and the respondent testified that, despite what had been represented in the Gift Letter, the $60,000 advance was always intended and understood to be a loan.

[56] In concluding, like Joyce J., that the gift letter before him did not negate the intention to grant a loan, Weatherill J. elaborated on the elements of the legal test to be applied in making that determination (at paras. 75-77):

[75] The law regarding whether a transfer made by a parent to an adult child is a loan or a gift was summed up by Madam Justice Brown in Hawley v. Paradis, 2008 BCSC 1255 at para. 30, after a review of the applicable authorities:

[30] Based on the case law presented to me, I conclude:

1. that the presumption of advancement no longer applies between adult children and their parents;
2. that as between adult children and their parents, the presumption is a resulting trust when the parents make gratuitous transfers to children;
3. that the court must consider all of the evidence in determining whether the parent intended the transfer as a gift or a loan;
4. that the factors considered in Wiens and Locke will assist the court in determining whether the advance was a loan or a gift.

[76] A determination of whether funds were advanced as a loan or a gift turns on the unique facts of each case. However, the following factors referred to above have been identified in the case authorities as those that should be considered when the advance occurs in a family context:

[77] In determining the intent of the person who advances money in a family context, the court must weigh all of the evidence to determine whether the presumption of resulting trust has been rebutted; it will depend on the facts of each case: Pecore v. Pecore, 2007 SCC 17 at para. 55.

I therefore find that both Ms. Paracy and Mr. Weinhaupl signed the promissory note on December 16, 2006 intending the debt to be a joint obligation. I am unable to find that Mr. Weinhaupl told Ms. Paracy that the down-payment was a gift from his mother. The only evidence suggesting that the down-payment was a gift is the Gift Letter and I accept Mr. and Ms. Weinhaupl’s explanation for it.

[64] Applying the test set out in Savost’Yanova in light of the facts as I have found them, I note the following:

a. there is contemporaneous documentary evidence of a loan, i.e., the promissory note and the mortgage;
b. the manner of repayment is specified, inasmuch as the promissory note states on its face that “Upon the sale of this condo, $60,000.00 is due and payable to my mother”;
c. there is security held for the loan (i.e., the mortgage);
d. there has been no partial payment because none has been called for until now; and
e. there was a reasonable expectation, or likelihood of repayment once the property was sold.

[65] In light of those considerations, along with all of the other evidence before me, I find that Ms. Weinhaupl’s advance of the down-payment was a loan, not a gift.