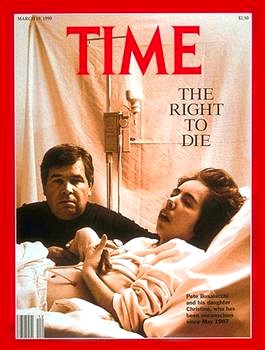 Right to Die Cases Are Proliferating

Family asks court to let Abbotsford woman die under terms of her living will.

Handout photo of Margot Bentley. In 1999, Margot Bentley, then in her late 60s, was diagnosed with Alzheimer’s. She used to be a nurse who cared for Alzheimer’s patients and wrote a living will that she should not receive medical care and be allowed to die.
The family of an 82-year-old women with Alzheimer’s so advanced she’s in a vegetative state asked the B.C. Supreme Court on Tuesday to order her nursing home to live up to her living will and stop feeding her the food and liquids that are keeping her alive.

Margaret (Margot) Bentley has lived at Maplewood Seniors Care Society in Abbotsford since 2009. Bentley is now at Stage 7 of the seven stages of Alzheimer’s, the most advanced level of decline, lawyer Kieran Bridge told Justice Bruce Greyell.

Bridge is representing Bentley’s husband, John, and her daughter, Katherine Hammond, in a lawsuit against the nursing home, Fraser Health Authority and the provincial government.

For the past three years, Bentley has been spoon fed by nursing home staff. Her eyes are closed most of the time, she doesn’t recognize any of her family members, she hasn’t spoken and she has only limited physical movement.

Her cognitive decline is so severe her “brain no longer appears to be able to tell her body what to do,” Bridge said.

Bridge told the court that Bentley had extensive experience working with patients with Alzheimer’s and other forms of dementia during her years as a registered nurse. He said she made it clear in her living will, which she signed and had witnessed in 1991, that she didn’t want to be kept alive simply to prolong her existence.

Bridge said her living will spells out that she if suffered from an incurable disease that she “be allowed to die and not kept alive by artificial means” including “nourishment or liquids.

“Following her diagnosis in 1999,” Bridge said, “she frequently expressed her wish that she did not want to live in a state of advanced Alzheimer’s or dementia.”

Bridge, reading statements from Bentley’s husband, said she “frequently expressed relief” that she had made her wishes so clear to family members. “She frequently said: ‘Don’t let it happen to me’,” Bridge said.

Bridge took the court through the story of Bentley’s life, from a baby born to a single mother and then adopted. He showed a binder with photos of Bentley as a woman, when she graduated as a nurse in the 1950s and another of her fishing.

In 1981, Bentley married John and became a realtor. They had a winter home in Mexico that they regularly visited until 2004 when her health deteriorated to the point that she could no longer travel.

“The reason I’m showing you these photographs is that they show she had a full, active and rewarding life,” Bridge said. “The contrast between what her life was and what her existence is now is startling.”

Court documents filed by the family include a 2011 statement by her husband John. He pleads with the director of care at the nursing home to follow his wife’s wishes and not feed her any longer.

“I’m begging you to instruct your staff to abide with Margot’s wishes as she has stated in this Living Will,” he said. “Do not prolong this existence.”

In another document, the lawyer representing the provincial government said nursing home staff would be helping Bentley commit suicide if they stopped feeding her.

“To the extent that (the patient’s) statement of wishes (living will) constitutes an instruction to assist her in committing suicide, it cannot be enforced without the commission of an offence,” Crown lawyer Jonathan Penner said.

In Canada, euthanasia is illegal.

The defendants argue that spoon feeding is basic care, not medical care, so cannot legally be stopped. They’re expected to make their arguments today and Thursday in court.

MORE ON THIS STORY

by TaboolaVIDEOS THAT MAY INTEREST YOU

French ‘Plan B’ may not work for heavy women

‘Before I Die’ walls inspire, motivate

Save 20% Off the UNIK Light Fixture Collection
Rona

We encourage all readers to share their views on our articles and blog posts. We are committed to maintaining a lively but civil forum for discussion, so we ask you to avoid personal attacks, and please keep your comments relevant and respectful. If you encounter a comment that is abusive, click the “X” in the upper right corner of the comment box to report spam or abuse. We are using Facebook commenting. Visit our FAQ page for more information.

IN OTHER NEWS
’14-year-old girl’ in chat room was police officer, North Vancouver man discovers
Mystery surrounds U.S. businessman’s escape from Bolivia into care of actor Sean Penn
No nose picking: Indian street vendors get hygiene lessons to help curb ‘Delhi belly’
Vancouver billionaire pleads guilty to charges after night of cocaine and sex
Vancouver city council approves 2014 budget
FROM AROUND THE WEB
10 Surprising Ways to Avoid Nursing Home Care (Caring.com)
5 Signs a Caregiver is Stealing From You (Caring.com)
When Software Saves Lives (and Billions of Dollars) (The Atlantic)
You Snooze, You Lose? Wrong. Russell Foster on the Science of Sleep (The Financialist)
Safety of antibacterial soaps (The Loop)
What’s this?

Princess Auto
VALID UNTIL DEC 24
See all your local flyers

MOST POPULAR NEWS
MOST READE-MAILEDSHARED

Founder of Red Scorpion gang gets 12 years for role in Surrey Six slayings
Milan Lucic ‘disgusted’ by his hometown (with video)
Calgary lottery winner will honour late wife by giving all of $40-million jackpot to charity
Doctors save severed hand by attaching it to man’s leg (with photos)
Happy hour is coming to B.C.
Surrey Six conspirator out of jail in three years

Sign up to receive e-mail alerts on breaking news from The Vancouver Sun.

About to Get Alzheimer’s Disease

INSIDE THE VANCOUVER SUN

Photos: Five most Instagrammed places in 2013

Photos: 13 things to know about the Boston Bruins’ Milan Lucic