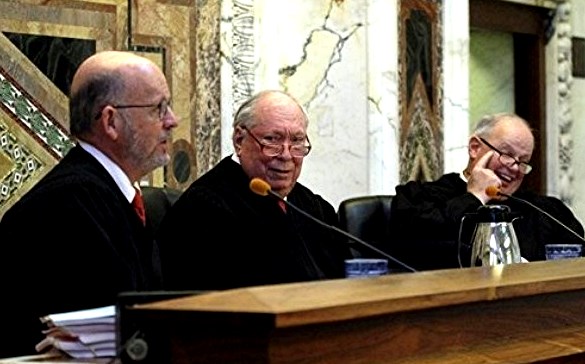 Lorintt v Boda 2014 BCCA 354 deals inter alia with the appeal test, the court uses when reviewing a trial where no oral evidence was give, but instead it was a summary trial based on affidavits.

One of the risks of summary trial is  the Chambers Judge has no or little opportunity to watch people on the witness stand and get a sense of their “true character”, which is often the most important aspect of estate litigation and allegations of undue influence, such as was alleged. Instead, the evidence is all presented in affidavit form. A Judge will usually decline to hear a summary trial where there are issues such as credibility-ie who to believe or disbelieve.

In February 2000 a father transferred his residence from himself to himself and his son in joint tenancy. After the father’s death in 2008, his executor sought a declaration that the son held the property in trust for the father’s estate. The chambers judge dismissed the executor’s claim. He held that the father intended to gift the property to the son. He found that the relationship between the parties was such that the presumption of undue influence did not apply. The executor now appeals. He submits that the chambers judge erred in determining that the presumption of resulting trust had been rebutted and further, and in the alternative, he erred in failing to find the transaction should be set aside because of undue influence.

Held: Appeal dismissed. It was open to the chambers judge on the evidence to find that the father had a donative intent. There was no basis to interfere with the chambers judge’s findings that the relationship between the parties did not give rise to the potential domination of one party by another.

A. Standard of Review

[72]         The parties are in agreement that the question of the intention of a party who transfers property to another for no consideration is a question of fact reviewable on a palpable and overriding error standard. The parties also agree that findings concerning undue influence are questions of fact and subject to a differential standard of review absent palpable and overriding error.

[73]         In this case there was no oral testimony. All of the evidence was by way of affidavit. The general rule in this Court when dealing with affidavit evidence is where evidence consists entirely of affidavits rather than viva voce evidence, the standard of review is that findings of fact should only be set aside if the finding was clearly wrong or was not reasonably supported by the evidence: Tangerine Financial Products Limited v. Sutherland, 2013 BCCA 283 at para. 46; Icahn Partners LP v. Lions Gate Entertainment Corp., 2011 BCCA 228 at para. 73; Orangeville Raceway Ltd. v. Wood Gundy Inc. (1995), 6 B.C.L.R. (3d) 391 (C.A.).