The Prudent Investment Standard For Trustees 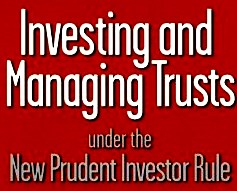 Miles v Vince 2014 BCCA 290 allowed an appeal and removed a  trustee for failure to abide by the Prudent Investor Standard expected of a trustee.

In investing trust property, a trustee must exercise the care, skill, diligence and judgment that a prudent investor would exercise in making investments.

[53]         The appellant argues that a prudent investor would not place all of the Insurance Trust’s assets into one investment, but instead, would have a diversified portfolio of investments. The respondent says that she was under no statutory obligation to diversify the investment portfolio or invest the trust funds in any particular manner.

[54]         In Fales v. Canada Permanent Trust Co., [1977] 2 S.C.R. 302, the Supreme Court of Canada held that the primary duty of a trustee is to preserve trust assets. This principle applies despite broad discretionary powers given to the trustee in the trust document. Justice Dickson (as he then was) articulated this standard (at 316):

This standard, of course, may be relaxed or modified up to a point by the terms of a will and, in the present case, there can be no doubt that the co-trustees were given wide latitude. But, however wide the discretionary powers contained in the will, a trustee’s primary duty is preservation of the trust assets, and the enlargement of recognized powers does not relieve him of the duty of using ordinary skill and prudence, nor from the application of common sense. [Emphasis added.]

[56]         In Froese, an employee was a beneficiary of a pension plan for which he was to receive regular benefits. His employer began to make irregular contributions to the plan, and soon ceased to contribute. As a result, the beneficiary’s pension was reduced significantly.

[57]         This Court held that Montreal Trust, as trustee of the plan, had a duty to inform the beneficiary when it became aware regular contributions were not being made. Chief Justice McEachern, for the majority, held (at paras. 57-58):

The trial judge framed the question as whether there was any obligation to volunteer information to the beneficiary. With respect, I think that is far too narrow. In my view, “true” trustees have obligations of prudence to protect not just the corpus of the trust, but also the interest of the beneficiaries from the ongoing operation of the plan.

I postulate a simple example. Assume that the Company appoints an investment manager, and that that manager instructs the trustee to invest the corpus, or so much thereof as the plan permits, in the subordinated securities of the company. (This is an extreme example because most plans provide investment rules that must be followed.) Absent such rules, can it seriously be argued that a trustee owes no larger, general duty of prudence respecting the trust which transcends the four corners of the agreement? In this respect, I agree with the comments of Dickson J. (as he then was) in [Fales], although stated in a different context. He said, no matter how wide their discretionary powers:

… a trustee’s primary duty is preservation of the trust assets, and the enlargement of recognized powers does not relieve him of the duty of using ordinary skill and prudence, nor from the application of common sense.

[58]         Section 15.2 of the Trustee Act enacted in statutory form the standard of care for trustees investing trust property. As noted above, it requires an investor to exercise the care, skill, diligence and judgment of a prudent investor.

[61]         Professor Waters notes (at 1008) that in 1997 the Uniform Law Conference of Canada promulgated the Uniform Trustee Investment Act, 1997, which imposed an obligation for trustees to diversify investments and provided a list of factors which a trustee may consider in making investment decisions.

The reference to the “prudent investor” is intended to bring into the picture the requirements of modern portfolio theory, which teaches that one must first decide what is the level of appropriate level of risk, and then seek to maximize the return within that constraint.

It is true that in some jurisdictions, particularly those retaining the prudent man standard, there is room for argument as to whether the trustee has the duty to diversify. The new prudent investor standard, based on modern portfolio theory, leaves less room for argument; diversity is inherent in modern portfolio theory. Even so, the circumstances of a trust might be inconsistent with diversification. For example, if a trustee expected to hold property only for a few weeks, it might not be prudent to expose the assets to the volatility which inheres in equity investments.

[65]         As Professor Waters suggests, however, the “prudent investor” standard implicitly brings modern portfolio theory into play, and thus requires the trustee to assess the level of appropriate risk and whether diversification is required.

Is the Loan a Prudent Investment?

[66]         In my opinion, the respondent trustee did not meet the prudent investor standard by investing all of the Insurance Trust’s assets, through the Loan, in the Main Street Properties.

[67]         The respondent says she consulted the Redden Report before embarking on the development of the Main Street Properties, and considered the information on the potential profitability of the development before making the Loan.

[68]         The respondent did not meet her statutory obligations to act as a prudent investor with respect to the assets of the Insurance Trust by relying on the Redden Report to assess the potential profitability of the development of the Main Street Properties. There is no evidence that she assessed the appropriate level of risk for the Insurance Trust, and then sought to maximize the return within that constraint. Rather, it appears she consulted the Redden Report to assess the development potential and required investment to develop the Main Street Properties, and used the funds from the Insurance Trust to meet those requirements.

[69]         The respondent maintains she was under no statutory obligation to diversify any investments made from the Insurance Trust. As Professor Waters points out, however, the link between the prudent investor standard and modern portfolio theory suggests that a trustee must assess whether diversification is required to preserve the trust assets.

[70]         In my view, prudent investment of the assets of the Insurance Trust required the trustee to consider the interests of all of the beneficiaries, including the appellant’s interest as an income beneficiary, in the context of the circumstances of the settlement of the Insurance Trust by Mr. Vince with proceeds of life insurance for the benefit of his wife and children after he knew he was ill. Mr. Vince’s interest in creating social housing, or his interest in the broader development of the Main Street Properties for market housing and commercial space with a component of social housing, which is what the respondent has embarked on, bears little relation to the creation of the Insurance Trust.

[71]         Had Mr. Vince intended that the proceeds of his life insurance be invested solely in the development of the Main Street Properties for the benefit of his children as the Division Date Beneficiaries, it is likely he would have provided for those proceeds to be settled on the Family Trust. I agree with the appellant that the existence of separate trusts indicates that Mr. Vince had separate intentions with respect to the use of the proceeds of the life insurance. It is a reasonable inference from the surrounding circumstances that Mr. Vince intended the life insurance proceeds to be used to support and maintain his widow and children after his death. It appears the chambers judge conflated Mr. Vince’s intention with respect to the Family Trust with that of the Insurance Trust.

[72]         Had the chambers judge correctly assessed Mr. Vince’s intention with respect to the Insurance Trust, he would not have concluded that investing all of its assets in the Loan was a prudent investment. The Loan is an illiquid asset invested in an illiquid real estate development project. It appears the Main Street Properties do not produce sufficient income to pay expenses including property taxes, as the proceeds of the B.C. Housing financing were used for that purpose. No interest or principal has been paid despite the Loan being due and payable, and there is no evidence of when the Loan will be repaid.

[73]         It is obvious that the Loan is in default. For the respondent to say that no demand has been made demonstrates “the difficult situation” for the respondent, recognized by the chambers judge, that arises if the Loan is in default. Only the respondent can make a demand for payment of the Loan, and as she argues, such a demand would put the development of the Main Street Properties at risk, contrary to her various interests as the primary promoter of that project.

[74]         Further, all of the security on the Loan was subject to the priority of the first mortgage and other security granted to B.C. Housing, including the priority agreement and option to purchase. If the option to purchase was exercised the Loan would have no value. To say that the priority agreement did not have that effect because the conditions under which it might be exercised had not occurred and were “highly speculative” simply ignores the terms of the Loan.

[75]         While the respondent in this case was under no express statutory duty to diversify the investment portfolio of the Insurance Trust, she nonetheless had a duty to act as a prudent investor. For the reasons above, I conclude her investment strategy in this particular case did not meet this standard.

The extent of the respondent’s duty of even-handedness towards a beneficiary whose interest in the trust is merely discretionary cannot possibly be extended beyond a duty on the part of the trustee to make reasonable enquiries into the financial needs for the discretionary income beneficiaries. The respondent has done this.

[78]         The respondent has provided no authority for, in effect, ignoring the income beneficiaries in investing the trust property, and I find her argument unpersuasive. As noted by Professor Waters (at 1025):

With regard to the trust fund the income beneficiary is looking for the best yield obtainable, while traditionally the capital beneficiary is concerned with the safety of the fund. However, high yield usually means high risk, low yield low risk, and here is the inherent conflict between the interests of these two types of beneficiary. It is the duty of the trustees so to manage the fund that they do the best possible for both, and this means holding an even balance between yield and risk. Unless, and to the extent only that, the trust instrument requires or permits them to do otherwise, they must ensure that the assets originally received into the trust are put into a form which brings about this balance, and that the assets they subsequently acquire, again in the exercise of their power of investment, have the same result.

[79]         In this case, the respondent failed to undertake an investment strategy that balanced the interests of the capital and income beneficiaries of the Insurance Trust. As a result, I find she breached her duty to remain impartial between these beneficiaries.