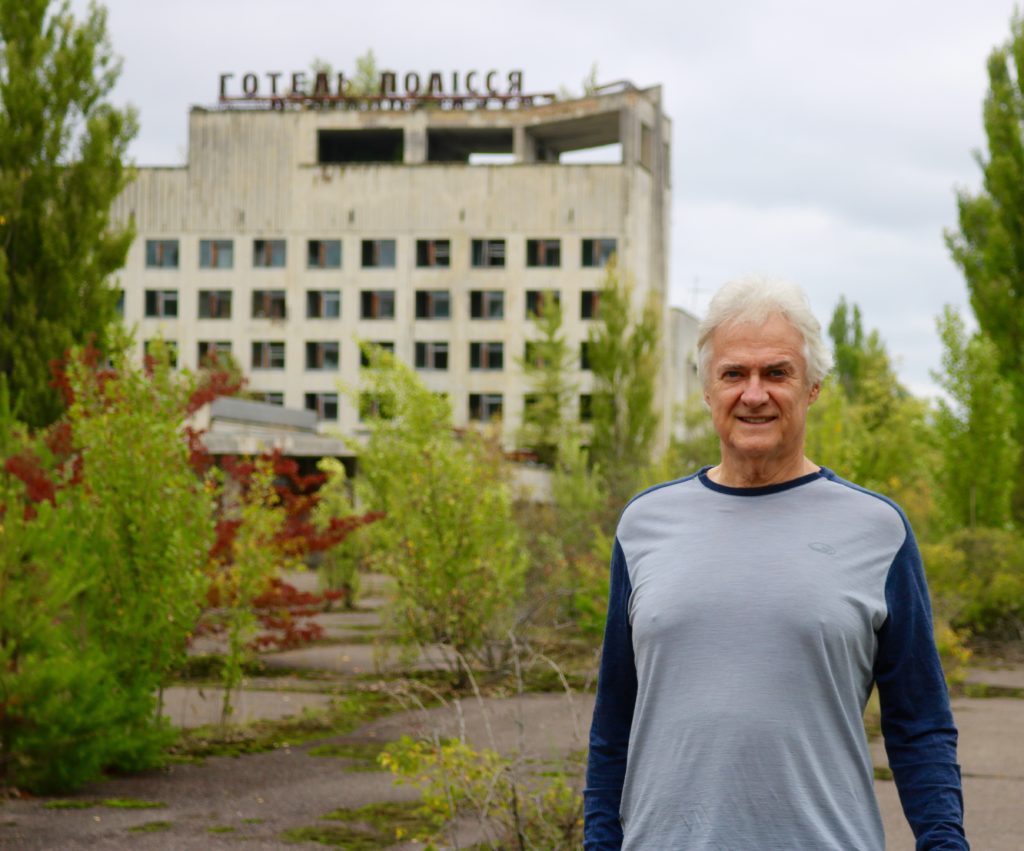 It will soon be 30 years since the Chernobyl nuclear disaster of April 26, 1986.

I visited the Chernobyl site in late September 2015.

Driving the 2-hour route from Kiev Ukraine to the military checkpoint of the 30 km exclusion zone around the blast area, our tour group of six was engrossed in a recent BBC video on the nuclear disaster, with never-before-seen interviews and documents that were harrowing in their totality.

The Cold War was still in force in April 1986 and secrecy was paramount.

I had no idea just how close the meltdown came to causing a steam explosion that would have blown not only the melted nuclear core of number four reactor, but an adjacent reactor. That likely would have caused the death of everyone in Europe.

Only the yeoman efforts of an estimated 500,000 to 600,000 workers prevented the total meltdown of the nuclear core. Many thousands still work today on the overwhelming task of the containment, cleaning, and recovery operations of the enormous radioactively contaminated area.

Only a totalitarian state such as the Soviet Union could have mustered the manpower required on short notice for the overwhelming task of encasing the reactor after putting out the extremely hot fires. It turned out to be the largest engineering project in history, at least prior to the subsequent near nuclear disaster in Fukushima Daiichi, Japan, in March 2011.

The Chernobyl explosion caused the release of a massive amount of radioactive materials over Europe over a 10-day period. Countless thousands of people were killed and many yet unborn will continue to bear the consequences of radiation.

The ghost town of Pripyat

Nearly 200 villages were evacuated within a few days of the blast on just a few hours’ notice. The closest town was not Chernobyl but the elite town of Pripyat, population 50,000, just 2 miles from the reactor. The “elite of the elite” among the “everyone is equal” communist state lived there in relative luxury with a well-stocked supermarket, extensive sports, and children’s activities and playgrounds. The biggest surprise was a large muralled disco that played prohibited Western music.

he senior engineers and other privileged people had three-bedroom apartments, almost unheard of in the Soviet Union, except for the highest party officials. Pripyat, incorporated in 1970, came to an early demise after only 16 years. The abandoned ferris wheel had never been used.

Pripyat was evacuated 3 days later on 3 hours’ notice with the assistance of 1000 buses and three trains. Everyone was told it would only be for 3 days but it turned out to be permanent. Just 2 nights before, most of them had stood on their balconies watching the fire at the plant 2 miles away.

An estimated 350,000 people were permanently removed from their roots and prohibited from returning. It was greatly unsettling to the societies of Russia, Ukraine, and Belarus, where most of the nuclear contamination fell.

Anyone who breathed the radioactive fallout and survived carries a metallic taste in their mouths to this day.

The cost to the Soviet Union in cleanup dollars alone in 1986 and 1987 was 18 billion rubles (then equivalent to American dollars,) at the time an exorbitant amount of money. The Chernobyl disaster is one of the significant factors that led to the fall of the Soviet Union in 1991.

Including travel time and dinner, the tour lasted approximately 12 hours.

I did not feel or sense radiation but our portable radiation counters would jump when moved only a few feet from a “cleansed path.” Containment is such a concern that on exiting the military exclusion zone, each individual passes through two increasingly sensitive radiation detectors and each vehicle is searched with radiation detectors.

The tour consists of stopping at various uninhabited buildings such as elementary schools and empty houses in old farming villages. There are some “Soviet style” monuments to the brave firefighters who lost their lives trying to put out the initial inferno. It is ironic that the pool of water with which they attempted to douse the flames ultimately became the potential steam explosion that almost caused a few hundred- million deaths.

The video told the story of just how close the entire rescue mission of over a half-million people came to failing the containment of the entire meltdown of the nuclear core that would have caused a steam explosion of sufficient force to destroy Europe.

One of the first memorable scenes in the video is the “Red Forest,” 4 square kilometres of pine forest directly downwind of the reactor that turned reddish-brown and died, creating a massive fire potential of dead trees.

We then visited an enormous missile-tracking device measuring 150 metres high by 750 metres long that was disguised at the time of the accident as a “children’s camp.”

Everything we saw that day, which included a walk through the abandoned former-elitist town of Pripyat, had the look of decay, movie-set creepiness, and the Twilight Zone question of what happened here?

In mostly 1970’s black and white, another video displayed the model communist life prior to the nuclear disaster, shown while we drove through the same deserted streets and visited the now-abandoned buildings.

I was amazed we were able to be within one block of the encased reactor, which in 2017 is to be further encased by a huge Avro Arrow plane-type hangar that will be slid on rails over the currently collapsing encasement that was made to last 30 years. The cost of the new sarcophagus, constructed to last 100 years, is enormous and is being shared by many countries.

For the most part, the forest and grass appear green and normal. I noticed fruit-bearing trees and rosebuds seemingly doing well. Many animals were released into the wild when the area was evacuated. While the exclusion zone remains devoid of people, the good news is that animals are living there—almost-friendly begging dogs, wild horses, bison, boar, moose, wolves, beaver, and falcons. We were told to watch for wildlife as it is plentiful. Regretfully, all we saw that day were 100 pound catfish.

The social and economic consequences of Chernobyl

The number of deaths to date from this nuclear disaster is surprisingly low … in the thousands. The long-term effects are simply not known; the area must be guarded for generations.

It is a fortunate sign that wildlife, flora, and fauna have seemingly replenished themselves, but it must be remembered that the half-life of radiation is 150,000 years.

At best, the restricted zone should remain uninhabited for at least 100 years post accident.

An estimated 7 million people are considered to have been in some way affected by the nuclear disaster. The social and medical benefits they receive are a huge burden on national budgets and are unsustainable to the three countries primarily involved,

Russia, Ukraine, and Belarus. The recent military clashes between Ukraine and Russia will further complicate the matter by drawing funds away from the compensation payments required for those affected.

The world had a very close call.