Vietnam Has it All! 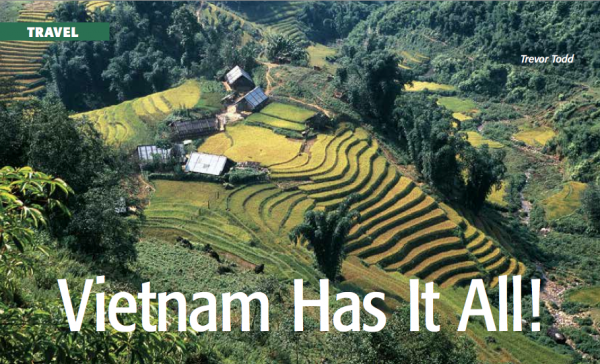 First published in The Scrivener.Written by Trevor Todd.

Anyone who has experienced travel in Vietnam can predict it will soon be one of the world’s ultimate tourist destinations.

There are so many reasons to rave about it! It has enough things to do to satisfy the most discerning tourist. The Vietnamese as a collective people are incredibly lovely, courteous, resilient, and hard-working. The hospitality I experienced as a solo traveller was truly amazing.

From the moment I arrived in the capital Hanoi, it was apparent that the populace was working at a pace to make up for lost time. The history of Vietnam is mostly one of war and resistance, particularly from the 1000- year domination by China, followed by the French army, and then the Americans.

After the Communist North victory in April 1975, the country was closed to the outside world for the next 20 years. In 1975 there was a mass exodus of “boat people” and other desperate refugees fleeing the communist victors. Many hundreds of thousands of South Vietnamese underwent years of political indoctrination following the war.

The country officially opened its doors to tourists in 1995 and the tourism industry grew in phenomenal leaps and bounds each year.

The country officially opened its doors to tourists in 1995 and the tourism industry grew in phenomenal leaps and bounds each year. Now, Vietnam seems to be doing a very capable job of keeping up with a globetrotter’s demand for activities, while still keeping its prices low enough for anyone to have a great time. Few places in the world offer as big a variety of inexpensive, colourful experiences as Vietnam does.

I arrived in the world heritage village of Hoy An and simply fell in love with it. Most of the travel books out there will describe how each visitor will want to stay at least 3 days . . . or perhaps a month . . . or never leave! It is a very genteel town with warm people; the vibe is suitable for
a traveller looking for tailored clothing, art, fine food, and minimal hustle and bustle.

Next stop was Hue, a former provincial capital famous during the Tet Offensive of February 1968. The Imperial City is well worth seeing and in fact is where much of the Vietnam War battles took place; military remnants are still available to inspect. The food was so spicy, I thought
my vegetables had given my mouth a “pizza burn.” Tourists are cautioned to check before ordering the specialty dishes of this city!

Crossing the street at almost any time of the day, however, requires a huge leap of faith. Literally millions of small motorcycles are travelling in every direction all the time. The safest way for you to cross the street is to hire a taxi, hop in, then close your eyes until you somehow arrive safely at your destination.

There are two “must sees” in the city of Saigon.

I was concerned I might be mistaken as an American but apparently my concerns were irrelevant. It would not matter. Americans are now more than welcome. In fact, Vietnam is a military ally of the United States. Seventy percent of the Vietnamese are under 30 years of age and thus were born after the War. A fascinating result of this was evidence of a young generation of American Vietnamese returning to Vietnam with large amounts of money to invest in their home country.

Of the 54 countries I have visited to date, Vietnam has vaulted to number one in terms of my favourite. Do yourself a favour and experience the vibrant experiences available to you as a traveller in Vietnam. You won’t regret it.