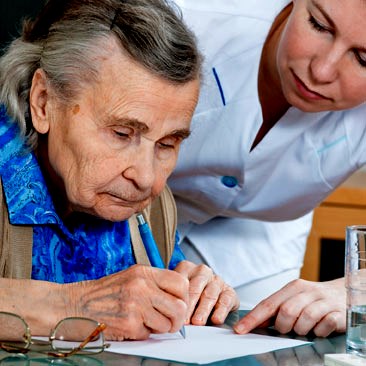 Positions of dependence or domination are frequently involved in estate litigation and typically relate to caregiving or predator type behavior that ultimately takes advantage of  feeble mind.

Elder Estate v Bradshaw 2015 BCSC 1266 involved a contested court action re  the validity of the deceased’s will as a result of allegations of lack of mental capacity and undue influence.

The deceased left his entire estate to a 26 year younger housekeeper who gradually became his caregiver. The will was challenged by his three nephews who were his next of kin on an intestacy.

The decision is a good source of law relating to both the legal framework for proving the validity of a will in solemn form, as well as a review of undue influence, both with respect to a bequest left in the will and monies advanced to a joint bank account.

The court examined the evidence of several witnesses and concluded that there was no undue influence on the part of the caregiver with either the will or the joint bank account.

The deceased was elderly, had no next of kin and was almost reclusive. The relationship between the parties was over several years and the witnesses testified that their relationship was not suspicious in any manner. The evidence supported the caregiver’s position that she was his main source of emotional and physical support for many years, and he stated that he did not know what he would do without her.

It is somewhat surprising that the court does not adopt  s. 52 WESA in its reasons for judgment relating to the issue of the shifting onus of proof re undue influence other than to say that the legal framework to prove the will in solemn form is still the law relating to the shifting burden of proof, despite the wording of s.  52.

[10]         In Leung v. Chang, 2013 BCSC 976, Dardi J. summarized the pertinent authorities and legal framework for analyzing a proof in solemn form claim where issues of testamentary capacity and undue influence are raised:

Legal Framework of Proving a Will Valid In Solemn Form

[25]      The Supreme Court of Canada in Vout v. Hay, [1995] 2 S.C.R. 876 clarified the principles with respect to the burden of proof in litigation regarding contested wills. The Court articulated the considerations which govern the interrelation of the doctrine of suspicious circumstances and the issues of testamentary capacity, knowledge and approval, undue influence and fraud.

[26]      In an action for proof of will in solemn form, the party propounding the will must prove on a balance of probabilities that the will was executed in compliance with the statutory formalities, that the will-maker knew and approved of the contents of the will and that the will-maker had testamentary capacity: Vout at paras. 19-20.

[27]      In order to make a valid will, the will-maker must have a “baseline level of mental acuity” or a “disposing mind and memory”, sufficient to appreciate and comprehend the nature and effect of the essential elements of the testamentary act. This encompasses an appreciation of the claims of the persons who are the natural objects of her estate and the extent of her property of which she is disposing: Laszlo v. Lawton, 2013 BCSC 305 at para. 185; Banks v. Goodfellow (1870), L.R. 5 Q.B. 549; Leger v. Poirier, [1944] S.C.R. 152 at 161. The assessment of whether a will-maker possesses testamentary capacity is a highly individualized inquiry and is a question of fact to be determined in all the circumstances: James v. Field, 2001 BCCA 267 at para. 51; Laszlo at para. 197.

[28]      In certain circumstances, the propounder of the will, in discharging the burden of proof, is aided by a rebuttable presumption of validity. If the will was duly executed in accordance with the requisite statutory formalities after being read over to or by a testator who appeared to understand it, it is presumed the testator possessed the requisite testamentary capacity and knew and approved of its contents: Vout at para. 26.

[29]      This presumption may be rebutted by evidence of “well-grounded suspicions”, referred to in the jurisprudence as “suspicious circumstances”, relating to one or more of the following circumstances:

(ii)        tending to call into question the capacity of the will-maker; or

(iii)       tending to show that the free will of the will-maker was overborne by acts of coercion or fraud: Vout at para. 25.

[31]      In Vout, the Court affirmed that if a court determines that suspicious circumstances exist, the applicable standard of proof is a balance of probabilities. However, the evidence must be scrutinized in accordance with the gravity of the suspicion raised in any particular case.

[32]      In order to rebut the presumption of validity, those attacking the will must meet the threshold of demonstrating that there is some evidence “which, if accepted, would tend to negative knowledge and approval or testamentary capacity”: Vout at para. 27; Maddess v. Racz, 2009 BCCA 539 at para. 31. The court in Scott v. Cousins (2001), 37 E.T.R. (2d) 113 (Ont. S.C.J.) describes the requisite evidence as that which “excites the suspicion of the court”. A “general miasma of suspicion that something unsavoury may have occurred” is insufficient to rebut the presumption of validity; the evidence must raise a “specific and focused suspicion”: Clark v. Nash (1989), 61 D.L.R. (4th) 409 at 425 (B.C.C.A.).

[33]      The court in Laszlo provides the following instructive observations regarding the doctrine of suspicious circumstances at para. 207:

Suspicious circumstances have been found to exist in a wide array of situations and are not necessarily sinister in nature. There is no checklist of circumstantial factors that will invariably fit the classification. Commonly occurring themes include where a beneficiary is instrumental in the preparation of the will (especially where the beneficiary stands in a fiduciary position to the testator), or where the will favours “someone who has not previously been the object of [the testator’s] bounty and does not fall within the class of persons testators usually remember in their wills, that is to say their next of kin.

[34]      When undue influence or fraud is alleged, the party opposing probate always bears the legal burden of proving on a balance of probabilities the affirmative defence of undue influence: Vout at para. 28. It is important to appreciate that in these circumstances, the doctrine of suspicious circumstances and the shifting of the burden of proof has no application.