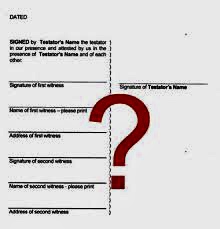 In Poulk Estate 2018 BCSC 1321 the court declined to “cure” and last unsigned will and testament under the provisions of section 58 WESA.

The case does not stand for the proposition that under WESA and unsigned will cannot be cured under section 58. It really comes down to the specific fact pattern of each case.

It was not disputed that the will did not meet the requirements of a validly executed will as set out in section 37 WESA that provides as follows:

Subsection 2, provides that a will that does not comply with section 37(1) is invalid unless the court orders it to be effective as a will under section 58.

Before granting an order that a document is fully effective as a will pursuant to section 58 (3) WESA, the court must be satisfied that the document represents the testamentary intention of the deceased.

The leading case in British Columbia is the Estate of Young 2015 BCSC 182 at paragraph 17:

“ Section 58 of the WESA is a curative provision. It confers a discretion on the court to relieve against the consequences of noncompliance with testamentary formalities and a record, document or writing or marking on a will or document “. In prescribed circumstances, section 58 permits the court to address and cure issues of formal invalidity in such documents. It cannot, however, be used to uphold a will that is invalid for substantive reasons, such as testamentary incapacity or undue influence “

In Re Lane Estate 2015BCSC 2162 the court summarize the applicable principles of the Manitoba decision largely followed by the British Columbia courts, namely George v Daily (1997) MJ No. 51 (C.A.)

a) The standard of proof on an application under the curative provision is proof on the balance of probabilities;
b) the greater the departure from the requirements of formal validity, the harder it may be for the court to be satisfied that the document represents the deceased testamentary intention;
c) the requirements for formal validity of a will serve several purposes, or functions, including:
1) an evidentiary function by providing the court with reliable and permanent evidence of testamentary intention in the terms of the will, and
2) a cautionary function by impressing upon the testator. The Solomon T, finality, and importance of his or her actions in making his or her last will and testament
d) the evidentiary and cautionary functions are particularly relevant to the determination of whether or not a writing or document embodies the testamentary intentions of the deceased.
e) Not every expression made by a person, whether orally, in writing, concerning the disposition of his or her property on death embodies his or her testamentary intentions
f) the court held at paragraph 65:

“ the term testamentary intention means much more than a person’s expression of how he would like his or her property to be disposed of after death. The essential quality of the terms that there must be a deliberate or fixed and final expression of intention as to the disposal of his or her property on death Bennet, Moliinary v Winfrey (1961) SCR 91

The court continued at paragraph 33 that:

“ The factors relevant to the determination of whether a document that does not comply with testamentary formalities embodies the deceased testamentary intention or context specific. They may include the presence of the deceased signature, the deceased’s handwriting, witness signatures, revocation of previous wills, funeral arrangements, specific bequests, and the title of the document.

In the Poulk decision, the purported will was a fill in the blanks form that was not completed by the deceased. In all likelihood the document was completed by a beneficiary of the will.

The absence of any objective evidence that the deceased knew and approved of the contents of the will is particularly concerning as the will was drafted by one of the named beneficiaries and is not consistent with the previously expressed intentions of the deceased.

The deceased was in hospital, and died seven hours after the will was prepared.

The court further stated that even if there was sufficient evidence to establish the deceased knew and approved the contents of the will, it was far from clear that the will was a fixed and final expression of the deceased testamentary intention.

The court found that the hospital records of the deceased indicated that he may not of appreciated the severity of his illness or the imminence of his death.

The will departed from the requirements for a valid will under section 37 of WESA to a significant degree. While it was in writing, it did not bear the signature or indeed any handwriting of the deceased or the signatures of two witnesses.

The affidavit material fell short of compelling the court to find reliable evidence that the will was both final and authentic.

Accordingly, the court declined to exercise its curative remedies under section 58 WESA