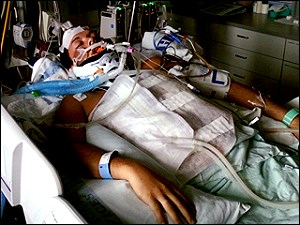 The Supreme Court of Canada has ruled that doctors cannot unilaterally choose to end life support services for Hassan Rasouli, an Ontario man who has been comatose since 2010.

In a 5-2 decision, justices for Canada’s highest court ruled doctors must first obtain consent from the man’s family, or, failing that, apply for permission from Ontario’s Consent and Capacity Board, a quasi-judicial body that addresses matters of consent under Ontario’s Health Care Consent Act.

The court stressed, however, that its ruling applied only to cases in Ontario, and did not address the broader ethical question of who has the final say — doctors or family — in end-of-life care for incapacitated people. In effect, it said that Ontario has a board set up for determining such matters, and that Rasouli’s case should have been brought before it.

Writing for the majority on the bench, Chief Justice Beverley MacLachlin upheld the decision of two lower courts rejecting the doctors’ position. The doctors had argued that Ontario’s consent act did not apply in Rasouli’s case because “consent is not required for withdrawal of life support that does not provide any medical benefit to the patient.”

Rasouli, a retired engineer, fell into a coma after undergoing brain surgery for a benign tumour in 2010. His attending physicians at Sunnybrook hospital gave him a poor prognosis with little chance of meaningful recovery from the coma, although his diagnosis was recently upgraded from “vegetative” to “minimally conscious.”

Rasouli’s family maintains his condition is improving and sought an initial court injunction to stop the doctors from ending life support.

Salasel screamed in approval when the decision came through Friday, saying she was “happy for all humans,” not just for her husband, who she said shows clear signs of consciousness.

The Rasouli case, at a glance

The history:In October 2010, retired engineer Hassan Rasouli underwent minor brain surgery for a benign tumour at Sunnybrook Hospital in Toronto. Days later, a bacterial meningitis infection left him severely brain damaged and comatose. With a prognosis that foresaw next to no chance of meaningful recovery, attending physicians in the intensive care unit announced plans to withdraw life support measures. Rasouli’s wife, herself a medical doctor, and two adult children felt it was too early to make a life-ending judgment call. The family got a court injunction to block doctors from pulling the plug. The case has since wound its way up to the nation’s top court.
The Question:The Rasouli case raised critical issues about end-of-life rights in Canada. Should physicians have final say on when to stop life-sustaining treatment when they feel it has become futile? Or should the families of incapacitated patients be able to defend their wishes for medical intervention and demand continued care? Clear guidelines were lacking.
The Significance:Supporters on both sides of the issue warned of wide-reaching impacts from any decision. Those in favour of allowing doctors to make the call said physicians could be more reluctant to admit patients to the ICU — where the sickest patients undergo aggressive treatment in hopes they will recover and be discharged — if they knew they wouldn’t have the ability to withdraw life support. Life-sustaining treatment is intended as a stop-gap on the road to recovery, they said, and sustained efforts to keep a body alive are painful, expensive and often do little more than delay the inevitable. Those supporting patient and family choice said Canadians have a right to care that is respectful of, and consistent with, a patient’s wishes, worldview and religious beliefs. Some worried the cost of intensive care might motivate decisions on the part of doctors, while the value of an individual’s life should be determined by those closest to him or her.
The Major Players:Sunnybrook Hospital doctors Brian Cuthbertson and Gordon Rubenfeld were appellants in the case. Rasouli’s wife, Parichehr Salasel, was the respondent on her husband’s behalf. Another significant player was Ontario’s Consent and Capacity Board, an intervener in the case. The board was one of the only provincial institutions set up to deal with questions of capacity to consent to medical treatment that fall under Ontario’s health acts, however it was created with a mandate of addressing mental health issues, not the ethical quandaries present in end-of-life care. Other interveners included: the Euthanasia Prevention Coalition, the Canadian Critical Care Society, Advocacy Centre for the Elderly, Evangelical Fellowship of Canada, and the HIV and AIDS Legal Clinic of Ontario.

The doctors argued withdrawing life-sustaining measures did not require consent from Rasouli’s wife, his surrogate decision-maker, because discontinuing care did not constitute “treatment” as set out under Ontario’s law. For the same reason, the doctors said, they did not require permission from the province’s Consent and Capacity Board to end care.

But MacLachlin wrote that the doctors’ interpretation of language in Ontario’s law was too narrow.

“First ‘treatment’ and ‘health-related purpose’ are not confined to procedures that are of medical benefit in the view of the patient’s medical caregivers,” she wrote.

The term “treatment” should be broadly interpreted to include “anything that is done” for a patient under a variety of circumstances — palliative, therapeutic, preventative, diagnostic or cosmetic, she said.

“In forestalling death, life support arguably falls within ‘therapeutic’ and ‘preventative’ purposes listed in the definition of ‘treatment,’ ” she wrote.

The court also rejected a third argument from the doctors, that requiring consent to withdraw life-sustaining practices in cases where there is no hope of recovery put them in an “untenable ethical situation.”

Dilemmas in end-of-life care are “inherent to medical practice,” MacLachlin said, and should not undermine provisions set out in the Act that clearly provide for a “meaningful role” of family and surrogate decision-makers in providing consent for treatment, including the discontinuation of life-prolonging measures and the beginning of palliative care.

“While the end-of-life context poses difficult ethical dilemmas for physicians, this does not alter the conclusion that withdrawal of life support constitutes treatment requiring consent under the HCCA,” MacLachlin wrote.

Further, the Act provides appropriate channels for dispute resolution through the Consent and Capacity Board, she said.

It is now up to the doctors to appeal to the board for a ruling on whether they can withdraw life support for Rasouli; however any decision rendered by the board can still be challenged in court.

A spokesman for Sunnybrook hospital told the Poston Friday that a decision has not been made yet on whether to dispute the decision by Rasouli’s family.

“There is a possibility of that. I should emphasize at this point, there has been no decision making around that …No decision has been taken about the consent and capacity board at this point,” chief medical executive, Dr. Andy Smith said.

“In terms of reflecting in general on how this has gone over the last three years, I do want to emphasize the extraordinarily positive relationship, the therapeutic relationship, between Mr. Rasouli’s family, the doctors, the rest of the care team. The care of Mr. Rasouli has been of the highest care and attention.”

While Dr. Smith “really appreciates the guidance the court has provided,” he said he is not worried that the decision will force Sunnybrook’s ICU to keep many patients on life support against the advice of their medical team.

“Sunnybrook has the largest ICU resource in the country. We have over 4,000 new, intensive care, really sick patients every year, that we take care of. When you look at our unit and all the other units across the land, these type of scenarios are not at all uncommon.”

“[But] It’s actually very common that the families work collaboratively with their doctors and their ICU teams to make the right decision in the case. That happens all the time.”

Justice MacLachlin was careful to state the court’s decision only addressed the issue of what Ontario’s act allows. Canada-wide, it did not address who “in the absence of a statute, should have the ultimate say in whether to withhold or withdraw life-sustaining treatment.”

Rasouli’s case did not, she said, “require us to resolve the philosophical debate over whether a next-of-kin’s decision should trump the physicians’ interest in not being forced to provide non-beneficial treatment and the public interest in not funding treatment deemed to be of little value.”

Five provinces and territories — Manitoba, B.C. Yukon, Quebec and Prince Edward Island – have similar legislation dealing with consent for medical intervention, but only Ontario has a board set up to deal with disputes. In the absence of such boards, dilemmas must be determined by the courts, Friday’s ruling concluded.

Justices Andromache Karakatsanis and Rosalie Abella formed the dissenting opinion on the court. In her written reasons, Karakatsanis held that Ontario’s Act should be interpreted the same way as common law, which she said does not “entitle a patient to insist upon continuation of treatment.

“Other courts have explicitly concluded that consent is not required for the withdrawal of treatment and that it is not appropriate for a court to interfere with medical doctors acting unilaterally professionally in the best interests of a patient.”