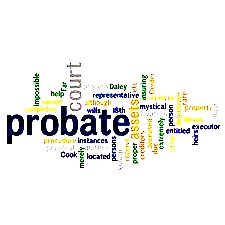 There are two ways of proving wills:

2009 BCSC 194 Romans Estate v. Tassone discusses the different forms of proving a will- when the validity of the will is in issue, the executor must prove the will in solemn form, by calling the requisite witnesses involved in the wills preparation, along with lay witnesses and medical evidence when necessary.

VI. Proof of the Will in Common Form or Solemn Form

[48] Often proof of a will in common form is all that is required for the administration of an estate where there is a will. Proof in common form, however, does not conclusively determine the will to be the valid last will of a person.

[49] Proof of the will in solemn form provides some protection for the will, in that it will not later be set aside, unless obtained by fraud or a later will is found: Tristam& Cootes Probate Practice (27th Edition, 1989, p. 572. As noted by the authors of the British Columbia Probate & Estate Administration Manual, 2nd Edition, 2008 Update, at p. 18-17, “[t]he safeguarding effect of a grant in solemn form is an application of the principle of res judicata to what is a judgment in rem”.

If there is any doubt as to the validity of a will or any apprehension that there may be opposition to it, it is open to the executor, or if there is no executor the person entitled to administration with the will annexed, to prove it in solemn form.

[51] In Trites v. Johnson, [1945] B.C.J. No. 76, [1945] 3 W.W.R. 100 (B.C.S.C.) Macfariane J., as he then was observed that “In a case of this kind where the validity of a will has once been called in question I think it is the duty of the executors to prove the will in solemn form of law….” Proof in solemn form was required even where the party originally requesting such had withdrawn their objection.

[52] In the circumstances, in my view probate in common form is not sufficient in light of the issues raised in the Conveyance Action and in light of the information that is brought before the court in the Probate Action. If the will is proven in solemn form, or per testes, it must be proven in open court, upon notice to all interested persons, and will not be admitted to probate unless the court is satisfied of the due execution of the will, the testator’s knowledge and approval of its contents, his capacity and non-revocation: Osterhoff on Wills and Succession, 6th Edition, 2007, Thomson, Carswell, p. 44. If the will is proven in solemn form then the issue regarding the caveat will be moot.