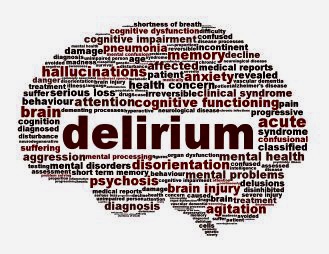 Delirium is also known as acute confusional state in the sense that acute means a sudden onset.

There is a great variety in the severity of deliriums and they can vary a great deal in their severity over a short period of time.

Delirium is not a disease but is rather a set of symptoms that are usually caused as a result of an underlying disease, a drug or alcohol abuse/withdrawal, and other medical conditions.

By medical definition delirium must be caused by an organic process and not be related to the symptoms of a specific mental illness.

Basically delirium is the common manifestation of a new “brain dysfunction” for any reason.

Delirium is the single most common acute disorder affecting adults in general hospitals. It affects 10 to 20% of all hospitalized adults, and 30 to 40% of elderly who are hospitalized and up to 80% of all those in intensive care.

Delirium is an abrupt change in the brain that causes mental confusion and emotional disruption. The patient finds it difficult to think, remember, sleep, pay attention and more.

Delirium has been described as a disorder of attention, wakefulness, cognition, and motor behavior, while a disturbance and attention is often considered the cardinal symptom.

Inattention is the cardinal and required symptom to diagnose delirium and it is noticeable on interview by distractibility and inability to shift and or sustain attention.

Delirious patients have diminished comprehension and reduced grasp of their surroundings and difficulties in connecting with their immediate environment, it executive functioning, memory, insight and judgment.

Psychotic symptoms occur in up to 50% of patients with delirium and some have hallucinations or delusions.

Delirium of most commonly affects seniors and those of ill health.

The medical treatment for delirium is typically to focus on the underlying organic reason for the cause of the delirium. This may or may not involve the use of antipsychotic medication.

It is useful information for lawyers to know when preparing wills and assessing mental capacity, that patients who have undergone surgery may experience delirium for several days and then recover.

I would venture to say that during the episodes of delirium that the patient/ client lacks mental capacity to understand and sign legal documents such as a last will and testament.