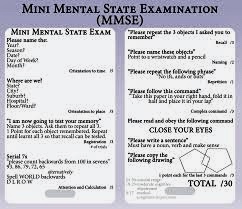 Lawyers frequently attempt to tender the results of the MMSE results as evidence of lack of mental capacity.

The courts have determined that such tests are simply a screening test and are not determinative of capacity – they are merely an indicator that tells a doctor as to whether a full capacity test should be made.

This is particularly the case when the test is administered on a simple occasion as it is well-known that such scores can rise or fall over a period of time.
See Lazlo v Lawton 2013 BCSC 305.

Courts can therefore reach a conclusion regarding mental capacity that conflicts with the medical diagnosis or the outcome of on MMSE or other medical test.

In Lowery v . Falconer 2008 BCSC 516 the family doctor examined the testator shortly before she signed the will and concluded that she was competent. Several months later, the doctor performed, thenE and confirmed that she was capable of managing her own financial and legal affairs.

Despite these medical findings, the court concluded that the testator lacked capacity, and set aside the will.

In Shkuratoff v Shkuratoff 2007 BCSC 1061 the court expressed apprehension about reliance on the score results of the MMSE in the absence of a robust explanation of the role that it plays in making the legal determination of testamentary capacity.

The court looked to the circumstances surrounding the assessment to determine the reliability and wait to be attached to the medical evidence.

In British Columbia Public Guardian and Trustee v Egli 2003 BCSC 1716 the court reviewed the admissibility of expert evidence to support a finding of incompetence. In the course of that review, the court noted that courts of sometimes allowed expert evidence, but have been very careful about the weight to be attached to that evidence. She cited Lynch v . Lynch estate (1993) 138 AR 41 (QB) where the court allowed counsel to lead psychiatric evidence about whether the individual was suffering from Alzheimer’s disease at a particular point in time.

However, the court diminished the weight which could be attached to this evidence, noting that the circumstances of the assessments were not apparent from the record, the reasons for the doctor’s conclusions were unclear, and his qualifications were unknown. Further, the judge noted that the doctor was not cross-examined on his assessment.

In Egli , the court further commented that the opinion sought to be admitted for the purpose of proving the truth of the opinions are not straightforward or mechanical observation. The opinions are psychiatric in nature. They are steeped in the expert skills of a geriatric mental health worker. They are not of kin to observation, such as blue toes. The opinions about Mr. Egli’s global assessment of functioning, his scores in the various mini mental status exams, and the diagnoses of his cognitive functioning. Our subjective opinions, requiring review of information, interviews, and deliberation of the author of the opinions. The court had not heard any evidence concerning the qualifications of the individuals who made the diagnoses and cannot therefore assess the degree of reliability that should be ascribed to the opinions.

It is also to be noted that a mental capacity assessment must be done by a doctor, and the nurses not qualified. Cooper v . Cooper 2000 BCSC 1650 at paragraph 4