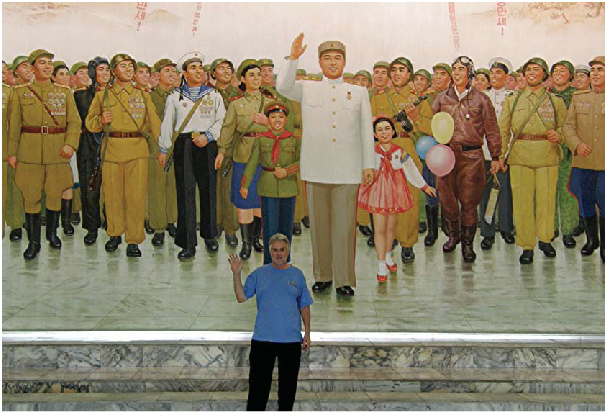 This Korean air carrier flies only thrice weekly; all three flights are between Beijing and Pyongyang, the capital of the Democratic People’s Republic of Korea (D.P.R.K.). The passengers on my flight were largely North Korean with a few Caucasians who appeared likely to be Russian.

The North Koreans were unmistakable—men in somber suits each adorned with a lapel pin of the “Great Leader” Kim Il Sung. The late Great Leader died 14 years ago. His son Kim Il Jong, known as “Dear Leader,” is the current leader.

On board, the in-flight magazine was a high-quality publication containing photos of the Korean War as well as several photos of smiling factory workers. Our reading material included a copy of the Pyongyang Times featuring several photos of Dear Leader posing with various military regiments.

The purpose of our visit was to confirm the distribution
of 200 tons of soybeans and vitamin and iron supplements to the intended children.

After a 2-hour flight. we arrived in Pyongyang. Above the airport hung a huge portrait of the late Great Leader. Few people or taxis were in evidence. I noticed groups of people planting rice all along the fields into Pyongyang. I was told they were office workers who were all planting rice that week.

I had the good fortune to visit North Korea with Susan Ritchie, founder of First Steps, a humanitarian charity dedicated to feeding North Korean malnourished children and nursing and pregnant mothers.

Susan is a Korean-speaking Vancouver woman—a Canadian transplanted to Korea as child when the entire family accompanied her father who worked as a school principal. She has visited North Korea approximately 38 times and frequently works as a Korean interpreter to high level government officials.

For the past 9 years, she has made it her mission to deliver food to children in orphanages and primary schools. First Steps now distributes high protein soy milk and vitamin supplements to 60,000 young children, as well as iron and other supplements to pregnant and nursing mothers.

The purpose of our visit was to confirm the distribution of 200 tons of soybeans and vitamin and iron supplements to the intended children. Susan makes such trips a few times each year.

She was a wonderful guide to the country and its people and is very knowledgeable about the people and the famine-related problems. The other members of our foursome were two representatives of the Mennonite Central Committee, responsible for this year’s donation of soybeans.

Immediately upon our arrival, we were joined by two members of the North Korean diplomatic corps—our minders for the duration of our stay. Both individuals were highly educated and multilingual. One had been to Canada twice and had worked at embassies around the world.

We spent our first four nights in Pyongyang, a city of 2 million inhabitants. The national capital was built as a showpiece and represents the very best North Korea has to offer. It is a very beautiful city with architecturally stunning buildings and many attractive boulevards almost devoid of traffic.

It soon became apparent, however, that the 20 million Koreans living outside the capital face a harsher life.

To all appearances, the residents of Pyongyang are well-groomed and seem relatively at ease. It soon became apparent, however, that the 20 million Koreans living outside the capital face a harsher life. They have much more restricted access to food, electricity, running water, and modern plumbing.

While large-scale international food aid deliveries have allowed the people of North Korea to escape widespread starvation in recent years, the population clearly continues to suffer from prolonged malnutrition and poor living conditions. The threat of famine is constant. The Great Leader/Dear Leader

LeadershipAt every site in the D.P.R.K. hang matching photos of the late Great Leader and his son Dear Leader. They hang in every household, schoolroom, and office throughout the country. The giant faces peer down from paintings and mosaics emblazoning buildings and walls. Each city is decorated with bronze statues of the Great Leader. They dominate town squares across the country.

Great Leader’s face is found on the badge adorning the lapel of every citizen, irrespective of age. Korean television seems largely dedicated to illustrating the greatness of the Kim dynasty.

The innumerable philosophical treatises and teachings of both leaders are reproduced on top of public buildings, on stone carvings, in bookstores and hotels. They flank public squares and highways.

Their every word has been historically recorded by accompanying officials and journalists. Every place they visited and all they have touched or commented on have become sacred.

Their birthdays are national holidays; every aspect of their life has been mythologized. Both their birthplaces are holy shrines visited daily by throngs of pilgrims and foreign visitors.

Three years of official mourning followed the Great Leader’s death in 1994. Not only was he leader-for-life, 4 years after his death he was made Eternal President by the Supreme People’s Assembly.

Great Leader is revered as a military hero, philosopher, father of the nation, and a genius who intervened in the most personal way with “on the spot guidance” for those crossing his path. All of his comments have been canonized and any perceived critics soon disappeared.

I was told that individuals do prepare Wills that dispose of their belongings. Since there is almost no private ownership and nearly total state ownership, there is little need for estate planning at the current time. It could be considered to be in its infancy stage.

Upon leaving Pyongyang, North Korea’s poverty and lack of infrastructure is readily apparent. Outside the capital, we visited four cities including the coastal city of Wonsan, a pretty seaside town.

Over 80 percent of the country is mountainous. Approximately 13 percent is arable and every available square inch is cultivated. Nevertheless, it is very difficult to produce enough food to feed the nation, even in a good year.

We were unable to view the incredible acrobatic team the first week we visited because they, like most people in the country, were spending the week in the fields planting rice. I saw many people foraging in the forests along the highway.

Torrential rains and extensive flooding in 2007 washed away topsoil and ruined low-lying fields. The country each year faces a looming food crisis and typically the very young and the elderly will suffer most.

Clearly there is an energy shortage in the country. Energy and food prices are currently escalating throughout the world. North Korea lacks sufficient oil to run its tractors and fertilizer to grow its crops. It also lacks the foreign currency reserves or credit to purchase food on the open market.

I recently heard that 9 million North Koreans are dependent on foreign food aid.

During the previous famine (1995 to 1998), estimates are that 15 percent of the population died from starvation (2 to 3 million people). The effects are still evident—an entire generation of children suffer from stunted growth and developmental problems.

At each orphanage and primary school visited, I underestimated the age of the children by about 2 years. For example, the children who looked 3 years old were actually 5 or even 6 years of age. Although Koreans are generally tall, I photographed one 10-year-old boy who came up only to my waist.

I observed beautiful triplets in an orphanage who were taken from their parents to be raised by the state as a matter of policy, because it wasdeemed their parents could not work and take care of three children. Dear Leader in effect became their parent.

North Koreans maintain a political philosophy of juche—self-reliance, inspired by the late Great Leader. Translated this means master of one’s self. The philosophy greatly pervades the culture and politics of North Korea. At times I suspect it makes it difficult for the North Koreans to accept aid from various countries and world charities.

I recently heard that 9 million North Koreans are dependent on foreign food aid. That represents almost 40 percent of the entire population. The children and the elderly are by far the most vulnerable. I hope to return to North Korea this Summer with Susan and First Steps to support this charity and the children it feeds.

If you would like to know more about Susan and First Steps, please visit the website at www.firststepscanada.org . Please take time to review and think about what you will see on the Website, then consider supporting it financially. A contribution of $3500 will buy an energy-efficient food-processing machine that can help provide 2000 children with a daily cup of soymilk.