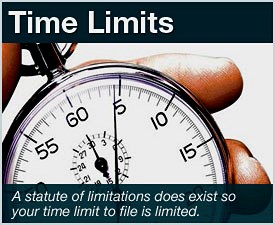 Under WESA, a claimant must start any court action within 180 days  of the grant of probate to the executor of the impugned will. This allows for the timely distribution of the estate by enabling the executor to distribute the estate without fear of later claims.

At first glance, this the six month limitation period appears fixed with no discretion to extend that time limit. Neverthess, there are three notable exceptions where the statutory time limit may in fact be extended.

The first exception occurs where another claimant has already made a BC Wills Variation Act claim in respect of the same estate within the prescribed six month limit. In such a case s. 4 of the Limitation Act permits an additional party to commence his or her action relating to the same estate even after the six-month limitation period.

As a practice note, it is extremely important for counsel to keep this exception in mind when seeking to settle any Wills Variation Act claim. Even though the six month limitation period has long since elapsed, in the absence of a court ratified settlement, other eligible claimants could still decide to make a late claim.

2. The Equitable Doctrine of Estoppel

The second exception involves the doctrine of estoppel which in some cases can effectively prevent a defendant from successfully pleading that a Wills Variation Act claim is statute-barred. This exception arises from the law of promissory estoppel.

Halsbury’s Laws of England defines promissory estoppel as follows: “when one party has, by his words or conduct, made to the other a clear and unequivocal promise or assurance which was intended to affect the legal relations between them and to be acted on accordingly, then, once the other party has taken him at his word and acted on it, the one who gave the promise or assurance cannot afterwards be allowed to revert to their previous legal relations subject to the qualification which he himself introduced.”

In British Columbia, this equitable defence of estoppel has been successfully raised as a shield to defeat the defendant’s argument that the plaintiff’s Wills Variation Act claim is statute barred.

This caselaw has stemmed from the case of Maracle v Travellers Indemnity Co. of Canada (1991) C.P.C. (2d) 213 (S.C.C.) which held that promissory estoppel may prevent a defendant from relying on a statutory limitation where a plaintiff can establish the following three conditions:

that the defendants made an unambiguous promise or assurance that they would not rely on the limitation period;
that the defendants intended to alter the legal relationship between the parties; and
that the plaintiff reasonably relied upon the representation of the defendants and thus did not commence an action within the prescribed time.
In British Columbia, the case of MacDonald v. MacDonald Estate (1996) 8 W.W.R. 160 first established that this defense of promissory estoppel could be used in respect of an otherwise statute barred action under the B.C. Wills Variation Act.

This case involved the will of mother who died leaving two sons. To one son she left one dollar. To the other son, her executor, she left a residence. The disinherited plaintiff son had received proper notice of the application for a grant of probate yet brought his action after the limitation period had elapsed The defendant sought to have the case dismissed on the basis that it was time barred by virtue of s. 3 of the British Columbia Wills Variation Act.

Harvey, J. held that the doctrine of promissory estoppel does apply to statutory limitation under the B.C.Wills Variation Act, saying as follows:
In my opinion, the case and textual authority favours the position that estoppel is available as an argument whenever a limitation period is relied upon regardless of the source. It is admittedly easier to use the estoppel argument where the statute gives the court discretion to extend the limitation period. However, the absence of such statutory jurisdiction in the Wills Variation Act, in my opinion, does not preclude the court from exercising its equitable jurisdiction in considering the remedy of estoppel. [para. 54]

Harvey J.held that the requirements for promissory estoppel appeared to be met. He thus refused the application by the defendant to dismiss the case as being out of time. The plaintiff was permitted to proceed to trial.

This decision was cited with approval in the later decision of Chan v. Lee Estate 2004 BCCA 644. In this later case, the trial judge found that estoppel by conduct effectively extended the BC Wills Variation Act limitation period by preventing the defendants from pleading the action was statute barred.

This case involved a Chinese family where the deceased father gave his sons the lion’s share of his estate. His daughters brought their Wills Variation Act claim three years after probate had been granted. The sons opposed the claim on the basis it was out of time.

The trial judge found that the sons were estopped by their conduct concluding that it would be “wholly inequitable” to permit the sons to succeed with their defence that the daughters action was statute barred. This finding was upheld by the Court of Appeal.

Needless to say, such late claims are clearly precarious. For example, the court refused to accept the claim of estoppel in Westover v. Cairns 2004 BCSC 1572. In that case a child commenced a Wills Variation Act claim slightly out of time. The child had hired a lawyer shortly after probate issued and the court found that he had clearly contemplated a Wills Variation Act claim at that time. The court found nothing in the correspondence or conduct of the other beneficiaries to evidence an unambiguous promise that they would not rely upon the limitation period. Thus the claim was dismissed.

3. Lack of Proper Notice of Intention to Apply for Probate.

The third exception involves s. 112(1) of the Estate Administration Act RSBC. This section requires an applicant for a grant of probate or letters of administration to give notice of the intended application to all those eligible to make a claim under the British Columbia Wills Variation Act. This notice is clearly designed to afford potential Wills Variation Act claimants a reasonable time to consider their options.

Desbiens v. Bernacki 2008 BCSC 696 dealt with a case where the deceased’s children did not receive the notice as required under the Estate Administration Act.

The case involved a deceased who had left his four young children in the care of the Ontario Children’s Aid Society. Other than brief and occasional contact, he had almost no contact with his children for the rest of his life. He moved to British Columbia where he remarried in late 2003 dying shortly thereafter. By his will he appointed his lawyer as his executrix and left his estate to his widow.

In giving wills instructions to his lawyer, the deceased had explicitly denied having any children. It was thus only after death that the executrix lawyer learned of the children when she found the names and addresses of three children amongst his papers. She mailed the required notices to those addresses.

The children learned of the death long after the passage of the limitation period and commenced a Wills Variation Act claim. The executrix and widow sought to have the childrens’ claims dismissed as statute barred.

The plaintiff children argued that the executrix had failed to take reasonable steps to give them proper notice as required under the Estate Administration Act and the defendants were therefore estopped from invoking the limitation period in defence of the claim.

The court conducted a detailed analysis of the steps taken by the executrix in an effort to comply with the notice provisions in section 112 of the Estate Administration Act and ultimately agreed with the Plaintiffs’ position.

The court ruled that s. 112 requires the applicant to take at least reasonable steps to determine the correct addresses of the intended recipients. More is required than merely dropping an envelope into a mailbox. Here the accuracy of the addresses was questionable as they were for individuals who had long been out of touch with the testator. Therefore the court ruled the executrix was required to take some further reasonable steps to confirm that any notices sent would likely reach the intended recipients.

The court was critical that the executrix had not applied for an order under section 112(3) of the Estate Administration Act for directions by the court with regard to the notices to be sent. In particular the court noted that she had presented no evidence of any steps taken to verify the currency of the addresses in the address book or of any research to find the plaintiffs’ current addresses. The court found that all of the addresses were long outdated and that none of the four children received any notice.

Citing the case of Chan v. Lee, the court ruled in favour of the timeliness of the childrens’ claim. The court ruled that the executrix failure to take reasonable steps to determine the correct addresses was conduct which estopped or prevented the defendants from raising the limitation defence. Bracken, J. held that the plaintiffs claim should not be dismissed as statute barred but rather should proceed to trial.

In conclusion, we should emphasize the utmost importance of commencing Wills Variation claim in a prompt and timely manner. As a practical matter it is always far more difficult to effectively realize any judgment, once the horse is out of the barn. As well, in any wills claim brought after the six month limitationhas passed, it will be an extremely difficult to convince the court that the claim should proceed.