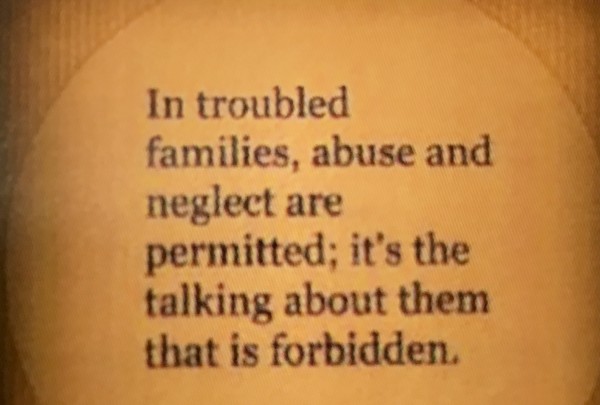 It goes almost without saying that anyone who attends at my office/disinherited.com will come from a dysfunctional family – it is rare that the client does not.

After having dealt with what I will call the victims of dysfunctional families for many many years,  one of the first things I do is try and reassure the client that there are probably many more people like themselves from similar families in this world than there are from happy families, and that in my office they are totally the norm.

I stress that I am nonjudgmental as many of such victims   have had way too much judgment already.

I often use humour where possible to try and lighten the situation of an estate dispute with their family –  typically one of the most dreaded  events to ever occur in my client’s life to date.

“You don’t choose your family” followed up with “it doesn’t take any skill to get pregnant but it is extremely difficult and rare to have a really functional family” indicates the perspective of my office.

Sometimes humor doesn’t do the trick and I will resort to other  more direct  forms of empowerment , such as simply telling  the long-suffering scapegoated adult child  that their father was a complete  self centered , narcissistic , obnoxious prick  that was all about himself.

I told that once to a client who had undergone many years of counseling and she seemed almost amazed at the very prospect of such a thought .

When I questioned had her counselor not  utilized such a direct  criticism of her father  over all the years  of treatment , I was informed  it had not  ever been discussed in such strong terms .

Without saying so on as many words the client let me know that she found  the “blunt ” manner in which I talked about her late  father to be empowering  as he had  always intimidated her and pushed her out of his life, for which she blamed herself .

When he left a hateful will disinheriting her for false reasons, you can imagine the insult upon injury, but from a lawyers perspective, it’s “tell me about it and let’s sue”.

I note there are several websites containing dysfunctional family quotes that are empowering.

1. Instead of wiping away your tears, wipe away the people who made you cry;

2. I am through with playing by the rules of someone else’s game;

3. I may be the black sheep of the family , but some of the white sheep aren’t as white as they try to appear;

4. Sometimes you have to burn a few bridges to keep the crazies from following you;

5.When I was a child I was told that my family would always have my back . They failed to mention the knife part;

7. Let’s have a family gathering for the remaining family members that still speak to each other;

8. You can’t treat people like shit and then expect them to love you;

9. Holding on to anger and hurt  is like drinking poison and expecting the other person to die;

10. They burned the bridge, then ask why I don’t visit.