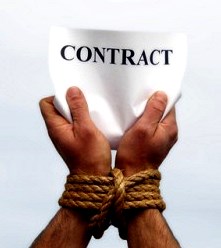 Cutts v Alterra Property Group Ltd  2013 BCSC 1951, involved the dismissal of a claim for work done, where the Court found that some of the essential principles of contract law were missing.

The Court reviewed the correspondence between the parties and concluded that they never entered into a valid contract.

The Court  then discusses some of the essential principles of contract law in British Columbia:

“The test for intention to create legal relations is objective.  In Smith v. Hughes (1871), L.R. 6 Q.B. 597, in a widely-cited passage, Blackburn J. formulated the test applicable to the question of whether parties have effectively agreed to enter into binding legal relations and said (at p. 607):

If, whatever a man’s real intention may be, he so conducts himself that a reasonable man would believe that he was assenting to the terms proposed by the other party, and that other party upon that belief enters into the contract with him, the man thus conducting himself would be equally bound as if he had intended to agree to the other party’s terms.

Constantly reiterated in the judgments is the idea that the test of agreement for legal purposes is whether the parties have indicated to the outside world, in the form of the objective reasonable bystander, their intention to contract and the terms of such contract. The law is concerned not with the parties’ [subjective] intentions but with their manifested intentions. It is not what an individual party believed or understood was the meaning of what the other party said or did . . . ; it is whether a reasonable [person] in the situation of that party would have believed and understood that the other party was consenting to the identical terms.  [Footnotes omitted]

[45]         The objective test serves the main purpose of contract law:  to protect the reasonable expectations created by promises.  Accordingly, the test of whether a promise is made, or of whether assent is manifested to a bargain, does not and should not depend on an inquiry into the actual state of mind of the promisor, but on how the promisor’s conduct would strike a reasonable person in the position of the promisee.  See S.M. Waddams, The Law of Contracts, 5th ed. (Toronto: Canada Law Book Inc., 2005), at p. 103.

[47]         It is a trite principle of law that in order for an agreement to be binding between the parties, they must have reached consensus on the essential terms of their contract.  To be a good contract, there must be a concluded bargain, and a concluded contract is one which settles everything that is necessary to be settled and leaves nothing to be settled by agreement between the parties.  What this means is that the parties must have evinced clear agreement on the essential terms of the intended contract.  See Rana v. Nagra, 2011 BCCA 392, at para. 19

[48]         The party relying on a contract must prove on a balance of probabilities the terms of the contract that he or she seeks to enforce.  To put it another way, the party alleging a certain term of a contract must satisfy the court that the existence of that term is more probable than not.  If the judge finds that the evidence is so evenly divided or if he or she is not sure who to believe, then the burden of proof has not been discharged.

[49]         When I apply these principles to the facts, I conclude that Ms. Cutts has failed to prove any enforceable agreement with Alterra.